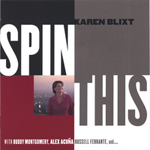 It started when she was a little church girl. Listening to her organist mother sing the harmony parts of hymns, Karen Blixt soon developed a knack for improvising.

The New York-born West Coast transplant has spent her life exploring different ways to present a song. After years of live performances in nightclubs, weddings, receptions and fund-raisers, she took a friend's advice and recorded her own album, Spin This, on her label HiFli.

A fixture on the Bay Area jazz scene, Blixt has enlisted the aid of a variety of session musicians. They include keyboardist Russell Ferrante of the Yellowjackets, former Yellowjacket Will Kennedy on drums, and percussionist Alex Acuna.

The album is mostly covers of songs by Count Basie, Rodgers and Hammerstein, Cole Porter, Thelonious Monk and Miles Davis, among others. It also includes three originals penned by Blixt and keyboardist Frank Martin, who appears on several tracks.

With a soothing alto voice comparable to Swing Out Sister's Corinne Drewery, Blixt delivers a jazz lover's treat, mixing message songs like "Carefully Taught and "Spin This with fun on "When You're Smiling, and standards, like "My Favorite Things, that have proven to be irresistible to many an upstart artist. The latter has been done so many times and so many ways, it's difficult to cover with anything worthy of notice. Blixt does an admirable job as vocalist, but what makes this arrangement work is the exceptional play of Kennedy, Acuna and bassist Troy Lampkins.

Blixt is more dominant on such selections as the opening track, Basie's "Swingin' the Blues, which features Kennedy, Acuna and Joey DeFrancesco on Hammond B-3 organ. It's a delightful appetizer that prepares the listener for a jazz buffet.

The title song, penned by Blixt and Martin, is a bouncy political statement, expressing the singer's displeasure for President George W. Bush. Backed by Martin on Fender Rhodes, Ferrante, Lampkins, Kennedy and Acuna, Blixt sings about political maneuvering: "Spinning, twisting, turning, stretching 'til the truth comes back around—Spin this!

Spin This should be appreciated for its purity if not for the excellent sounds created by Blixt and her cast. With a lot of modern music being heavy on production and light on artistry, it's always good to hear the opposite.

Blixt expresses herself well from start to finish. And by surrounding herself with an array of dedicated professionals, she's created an album that's got some staying power. That is the beauty of music: when it's done right, it never gets old.