By NENAD GEORGIEVSKI
July 2, 2007
Sign in to view read count 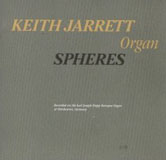 Pianist Keith Jarrett has carved out a unique place among contemporary improvising musicians. Through the years he has proven to be restless and ever open to new landscapes for improvisation, and Spheres is no exception. The CD release, with only four of the nine movements, is a shortened version of the double LP, Hymns/Spheres, originally issued in 1976. Given Jarrett's continual recording career over the years, and taken in retrospect, it would seem tempting to consider Spheres as a private indulgence, which is not true at all. On the four movements of "Spheres" heard here, Jarrett strikes an interesting balance between sensibility, 18th century technology and technique.

Take this music in with a deep breath and you will find yourself entranced by its carefully woven sequences, light and warm, dark and deep atmospherics, and cascading, slow melodies. Spheres is played on a Baroque organ, and Jarrett manages to get strange and electronic-like effects from an unusual combination of organ stops and partially opened stops.

The movements marry slow sequences with "breathing medieval synth" lines. Each track builds sonically, gradually introducing rich bass tones. Jarrett's magic permeates every corner of this recording. Each piece on the disc fits together like a completed puzzle of interlocking parts, all coming together on a multi-layered canvas of creativity; magical, deep and inspired. Though this is totally different to his piano works, Jarrett performs exquisitely and seemingly effortlessly.

Spheres is filled with plenty of aural-organic spontaneity and a mood that shifts from ethereal and celestial to earthy. Hopefully the complete version will be reissued some day. As its title would suggest, Spheres is a recording of transcendent beauty.