Peter Madsen: Sphere Essence - Another Side of Monk 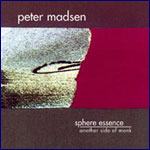 Peter Madsen pays tribute to Thelonious Monk and his music on the solo piano recording Sphere Essence ' Another Side of Monk. Madsen spreads the canvas with rich textures, bringing the well-known compositions to life through his expansive resolution of their complexities. Monk's music has had more exposure since his death than I would imagine he ever dreamed possible; yet Madsen stamps the selections with a unique identity and brings freshness and vitality to the repertoire.

The pianist employs various techniques to convey his originality. On some tunes, he uses his left hand quite adroitly to institute rolling rhythm while he reinterprets the melodies with his right - or he might take a stabbing, interruptive approach with the keys and piano strings to add halting phraseology. Frequently the lower keys are used as a form of bass line to free him to develop the improvisational movements in the upper register.

His examination of the less frequently heard tune 'Oska T' is particularly stirring. Madsen uses dense chords as a platform and runs freeform over the keys in making the piece an improvised gem. He glides very gently into one of Monk's most moving pieces, 'Ugly Beauty,' spinning a delicately constructed ballad line that combines inside and outside intricacies in one lovely package.

The attraction of the recording, however, is grounded in Madsen's ability to reflect Monk in a customized way. The melody lines establish the link, yet Madsen takes wing and fills in all the spaces with reinvented schemes that reveal the essence of the original songs in new and often startling ways. Monk's signature stabs appear and dissolve into territory having imaginative landmarks, providing the songs a route for returning to the foundation with a refreshed mindset. Madsen has captured Monk, and in the process confirmed a concrete link to his own musical personality.

Visit Playscape Recordings on the web.