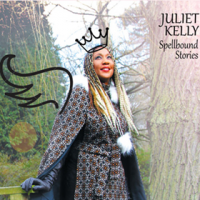 Exactly which novels gave Kelly her inspiration isn't made clear by the songs (except for one) or the CD notes, so the literary listener might enjoy a game of "What Book?." Kelly's website does give the game away, though, for those who might rather enjoy these songs as they are without puzzling over their inspirations.

The moods on Spellbound Stories shift between joy and despair. The reggae-ish "Little Things" is unremittingly cheerful and upbeat, Kelly's voice (lead and backing vocal) at its brightest as she lists the titular characteristics that attract her. It's a mood that's shared by "Beautiful Smile"—not just in Kelly's vocal but also in the bouncy and vibrant instrumental performances.

"No One Can Tell" mixes Eddie Hick's military drum rolls with the more dissolute, Parisian bar-room sound of Nick Ramm's keyboard and Oli Hayhurst's bass—the drums heighten Kelly's doomy vocal, contrasting with the louche, absinthe-soaked sound of the other instruments on a tale of deceit and anger. "One More Dance" is one of the album's most dramatic songs, a tale of a woman who grabs the chance of a last dance as she "waits for the end."

There's an obvious inspiration for "Wuthering Heights." Two inspirations, really—for this is a cover of Kate Bush's classic paean to Emily Bronte's evocation of all things ghostly and moor-ish. It's something of an oddity—Kelly has described it as a Marmite song, one to be loved or hated. For this reviewer of a certain age, whose memories of Kate Bush's original run deep, the experiment is an honorable failure: Ramm's keyboard uncharacteristically fails to capture the atmosphere of the tale and Kelly's vocal lacks Bush's spookiness. Her wordless vocal on "Ghosts" (mixed by Sebastian Rochford) does have a touch of spookiness, the song redolent of Krzysztof Komeda's movie soundtracks.