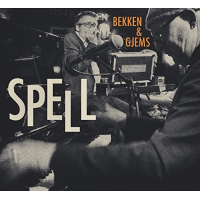 For Spell, the good doctor writes a new prescription for traditional Norwegian folk infused with New Orleans style jazz. Harmonicist Richard Gjems is co-featured. Bekken and Gjems have been collaborating for over ten years now. Gjems has also been nominated for a Spellemannprisen in the past. On this outing he brings his tonality and textures to the forefront with a melodic sensibility rarely heard from a harmonica. This is particularly evident on "Midisijollin" and "Black Coffee," where the timbre is that of a trumpet with a cup mute. The pair's take on "The Inch Worm" is elegantly subdued.

Bekken and Gjems were joined by guitarist Jan Christian Gjems (Richard's brother) and, for one song, by guest vocalist Noora Noor. She delivered a slow-burn on "Jealous Kind." A jazz, blues, and soul singer, Noor was named Norway's Female Artist of the Year in being awarded the Spellemannprisen in 2009. Bekken also added meaningful and soulful vocals on "I'd Rather Drink Muddy Water" and "Come On Down To My House." The latter opened the show with good spirit and set the tone for the evening's mood and tenor.