Orchestra Baobab: Specialist In All Styles 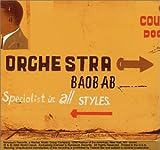 Hot on the heels of the recently reissued 1982 classic Pirate's Choice, the Orchestra Baobab recently re-formed to deliver an update to its signature Afro-Cuban sound. Unlike music of the same name which comes from the diaspora traditions of Cuba, Baobab goes at it the other way around. Whereas traditional Afro-Cuban music reflects the West African roots of the Cuban people, this version arose from a direct reflection across the Atlantic. During the '50s, Caribbean music hit hard in countries like Senegal and Ghana. Claves, timbales, and maracas became standard fare during the birth of Highlife music. Musical forms changed; new harmonies and vocals reflected this cross-cultural pollination.

In the '80s, Orchestra Baobab was the most popular band in Senegal. Its music was fundamentally affable.

Those Senegalese roots refuse to die, and that's what gives this music its characteristic color. West African guitar styles, born from highlife, criss-cross and intersect in a decidedly rhythmic fashion. The vocals, which quite frequently veer into Buena Vista Social Club territory, still retain a folk element. Senegalese singing has a certain level of intensity, a certain minimalist searing energy, which can never be sublimated. You can't listen to "Ndongoy Daara" without feeling you've come close to vocalist Assane Mboup's heart. No way.

That said, Specialist In All Styles has an unswerving sense of raw celebration. Each tune, whether salsa or son or another flavor, begs the listener to get up on his feet and dance. Even the protest tune "Ndongoy Daara" has a fresh, lilting feel. Ten minutes later, the massive "El Son Te Llama" brings guajira into a direct collision with mbalax, and in the process comes right down to roots. Pure groove. With "Gnawoe," you find yourself somewhere between the island and Veracruz, easy guitar solos connecting the dots. But don't look here for extended improvisation; the spirit of thie music is pure dance.

For a band that's been dormant so long, this awakening is a welcome event. Great music often comes from a collision of styles, and more than four decades after Cuban music hit Senegal, the mixture remains at a boil.