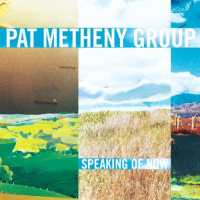 One would be hard pressed to find a jazz-based ensemble that has stayed together for as long as the Pat Metheny Group, which was formed in 1977. Of course, the band is not the sole musical outlet for any of its members and fans wait patiently as much as five years between releases. Still, over the course of eleven studio albums, the Pat Metheny Group has carved a distinctive niche and gained an unparalleled following.

A successor to 1997's Imaginary Day, the newly issued Speaking of Now marks somewhat of a milestone for Metheny and the guys in that three new faces take their spots aside the guitarist, alter ego Lyle Mays, and bassist Steve Rodby. Drummer Paul Wertico finally decided to split the scene, with Antonio Sanchez taking his place. Interestingly enough, this native of Mexico City relies on a great variety of drum and cymbal textures very much in the tradition of Wertico and Danny Gottlieb. Much more surprising would be the inclusion of Richard Bona on vocals and percussion, plus trumpeter Cuong Vu adding a new sonority. While Bona has put his West African spin on the plethora of assignments he has taken part in, Vu will be most familiar to those who follow the avant-garde scene.

Musically Speaking of Now is as strong as any of the group's best albums, even if it plays it a bit safe when compared to the far reaching implications of its predecessor. The scope of the material is narrower, without any overt flag wavers in the lineage of such challenging tunes as "The Roots of Coincidence" or "The Heat of the Day" from Imaginary Day. There's also less of a reliance on electronic layering and Mays fans will be pleased in regards to how much exposure is given to his acoustic piano forays.

The centerpiece of a 72-minute program is "Proof," which gets a setup from Rodby's six-note bass riff. Impressive is the way the group negotiates some irregular phrase lengths that navigate through different time signatures. Then, it's a quick launch into a lengthy Metheny solo. Cuong Vu has assimilated his employer's muse to the point that when he first enters you're almost fooled into thinking that Metheny has merely switched to guitar synth.

"Another Life" introduces us to a new vocal timbre provided by Bona and Vu, with a chant of Gregorian proportions that unpredictably leads to a delicate bossa groove. "You" also finds Bona's characteristic vocals as part of the mix on an expansive track that includes a lengthy Mays feature in the tradition of "San Lorenzo." A percussive gamelan pastiche makes the briefest of appearances as an intro to "The Gathering Sky," which sports a Ralph Townerish melody and the kind of flamboyant ending that has become a Metheny trademark.

Arguably, the most memorable tracks are the two that seem to have a connection to past glories. "On Her Way" is preceded by a mix of African kalimba and a Middle Eastern trumpet fanfare, only to settle into a back beat groove similar to "Praise" (from First Circle ) and some double time shouts from Metheny. "Afternoon" may be short, but it is undeniably addictive and includes a hook that will have you reaching for the remote and the repeat function. In fact, the entire program holds up very well under repeated listening, even if some high expectations might have initially been dashed.

As It Is, Proof, Another Life, The Gathering Sky, You, On Her Way, A Place in the World, Afternoon, Wherever You Go