By HRAYR ATTARIAN
September 25, 2007
Sign in to view read count 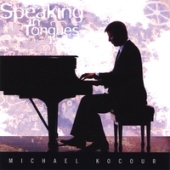 Recording a tribute album is a brave and often thankless undertaking since listeners and reviewers are bound to compare the musician doing the recording to the one to whom homage is being paid. This becomes a more courageous act when the subject of the album is not one but two giants of modern music: pianists Bud Powell and Thelonious. Monk. Michael Kocour is up to the task on the tasteful and interesting CD, Speaking In Tongues.

Kocour (accompanied frequently but not always by bassist Dwight Kilian and drummer Dom Moio) tackles five compositions by Powell, five by Monk and a medley of two tunes (one by Monk and one by Monk and Kenny Clarke). The talent and the experience of the musicians come through in the first few notes. Kocour successfully reinterprets these melodies by avoiding slavishly copying the composers' own recordings of theses tunes on one hand, and losing their essence on the other. He sheds fresh light on the pieces by bringing a modern sensibility to them through understated yet adventurous improvisations.

The further from the melody line his solos go the closer to the spirit of the composers they get. His reinterpretation of these eleven tracks is definitely in the modern post bop vein, and the support by the other two musicians both in the group interplay and in their solos fits well with the whole theme of the album. This recording does not break new musical ground, but imprints these masterpieces with a modern 21st century style in a manner that invigorates them yet stays true to the essence of their composers. It is a further testament to the timelessness of this music, and an album that would likely have pleased both Bud Powell and Thelonious Monk.