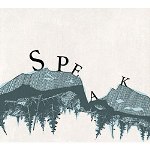 The Seattle-based quintet Speak explores a multitude of musical moods with their eponymous recording debut. An exemplary model of genre-defying music, the disc features original compositions that delve into odd-metered progressive rock grooves and spontaneous bursts of improvised sound that are at times explosive.

The opening cut "Amalgam in the Middle" makes anthemic pronouncements with an extended section for Aaron Otheim's intensity building piano solo, garnering strength from the free-flowing interplay of bassist Luke Bergman and drummer Christopher Icasiano. Trumpeter Cuong Vu (Pat Metheny, Laurie Anderson) leads the lyrical friendliness of Bergman's "People or Cats," a piece played out in multiple variations, each with an added layer of dissonance, rhythmic drive and harmonic clusters. Bergman's "Polypockets" swells with a paradoxical pull between a rock-driven pulse and all-out tonal abandonment.

By the fourth track, saxophonist Andrew Swanson's "Mustard Knuckles," an ensemble mentality with shared ideals begins to emerge. This piece, suggesting Metallica meeting Weather Report, introduces clever themes that seem to bask together in a musical landscape found off the beaten path. Icasiano's "Pure Hatred" begins with friendly banter and quickly melts into some kind of inescapable confrontation.

The disc ends with Otheim's "Litany Split," a somber, minimalistic dirge, culminating in an expanded final crescendo. Speak presents an open-ended direction, reliant on group dialogue, unfolding in the moment and paying heed to context.