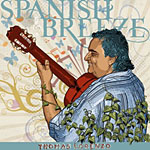 Guitarist Thomas Lorenzo moved to Barcelona, Spain in 2003 and has since produced four solo albums, including the very charming Spanish Breeze. The son of Spanish immigrants, who fled Franco's Spain and settled in Lorenzo's birth place of Australia, Lorenzo never really forgot his Spanish ancestry, learning to weave traditional Spanish music within the Australian rock and pop music he often performed.

Some of that rock and pop influence comes through on the first five tracks of Spanish Breeze, where Lorenzo plays electric guitar much like a rock star. Two members of his quartet—bassist Alphonso Johnson and drummer Walfredo Reyes Jr.—also bring a rock background, having played with icons Santana and Steve Winwood, as well as jazz fusion super group Weather Report, while pianist Dave Garfield boasts traditional jazz credentials.

While the rock-styled grooves of the opening pieces may beg the question, "Where's the Spanish music," the true Spanish flavor of this recording comes shinning through on "Dulzura con Rabia." Lorenzo takes up his acoustic guitar and gently picks the strings on a beautiful, soft ballad, leading to more of the same with Armando Manzanero's Flamenco-tinged "Contigo Aprendi." The Spanish winds continue on the lovely "Mi Alma (My Soul)" and "Belleza de Agua Dulce," as well as on "Merry Go Round" and his last original, "Bailas?"

Leaving one of the best pieces for last, Lorenzo performs a soothing arrangement of Hoagy Carmichael's immortal "Georgia," capping off an interesting meld of Australian rock and Spanish traditional music. Lorenzo is more than convincing as an amazing guitarist, playing electric and Spanish acoustic guitars with equal vigor and skill. If a touch of rock, a taste of Spain and the cool breeze of a fine Mediterranean Latin guitar seems inviting, then a gust of Spanish Breeze may be in the forecast.