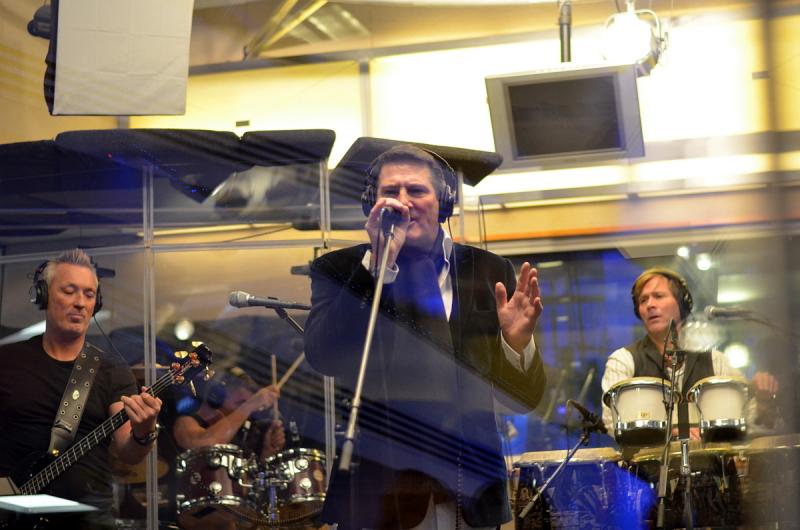 A small group of 40 and 50-something men and women huddled outside of the McGraw Hill building in New York City in a cluster, kidding around, eager for a glance or maybe an autograph, toting odds and ends of memorabilia under arms clad in substantial winter coats. Bundled against the winter wind that cut between the tall buildings on this side of town, these die-hard Spandau Ballet fans hoped to catch the band before they rode the elevator up to tape their "Artist Confidential" show for the satellite radio's "1st Wave." Black SUVs were parked along the curb, deserted except for an errant driver here or there, ready to ferry artists away from the home of the esteemed SiriusXM radio's headquarters.

A lucky group of 13 and their guests watched this all from inside the lobby, eagerly anticipating the fun to come in the modern and welcoming studios upstairs. Spandau Ballet, the iconic band that formed in 1979 from working class roots in London and took the world by storm with their New Romantic inspired, cutting edge songs and fashion prowess, broke up after a decade of Top of the Pops appearances, international tours and a steady stream of hit singles, six albums and breathtaking, cinematic videos, much to the heartbreak of their fans. Fast forward 20 years and a huge number of personal accomplishments including solo projects, acting and directing achievements, hit movies and growing families not to mention serious bumps in the road like life altering health challenges and a cantankerous court case that pitted band members against other members. During a press conference on the HMS Belfast in London in 2009, the band returned to the site where they played one of their unforgettable first gigs, to put the rumors to rest and announce an upcoming tour and album that followed a few months later, elating supporters everywhere.

As Spandau Ballet prepared for their Soul Boys of the Western World Tour that will kick off in San Francisco and Los Angeles here in the states, then continue snaking back across the country in April to coincide with the launch of a documentary by the same name, the five man band touched down in New York to appear on a popular morning TV show and to play and be interviewed for SiriusXM by 1st Wave's Richard Blade, the knowledgeable authority on all things music and 80s.

As the winners stepped off the elevator, they encountered a glass enclosed, sound-proof studio right off the reception area. State of the art and beautiful, Tony Hadley, Gary and Martin Kemp, Steve Norman and John Keeble were ensconced inside, deep in sound check. Looking fit and jovial, the band made eye contact with their intimate audience and at various points, exited the studio through side doors and addressed the excited bunch, friendly and approachable. Hadley grabbed some paper out of his satchel that rested near a Burberry suit bag on the floor near the front of the studio and mugged for the crowd. Keeble's drum kit rested in a separate glass enclosed studio within a studio. Norman's bongos sat nearby as well as his sax. Gary Kemp caught the eye of a fan taking a cell phone photo and smiled widely. Martin Kemp, on the other side of the Keeble's drum kit, beamed as he surveyed the scene, the black strap of his Wal bass resplendent with grommets and accenting against his black t-shirt and athletic frame. A tech tuned up guitars near a keyboard. As the viewers assembled on silver bleachers facing the studio, a buzz broke out when newlyweds Donnie Wahlberg and Jenny McCarthy posed in front of the step and repeat wall and greeted people milling about the lobby. Blade, amiable and gracious, came to the front of the bleachers, asking for questions to include in the interview and chatting up the winners.

The session started out with a robust rendition of "Only When You Leave." Hadley, youthful and dapper in a deep blue velvet blazer over an untucked white button down and with a dark scarf draped around his neck, was in fine voice, powerful and full as he grooved and strutted, in his glory, feeding off the energy of the enthusiastic crowd. "Communication" left the viewers blissfully singing along as they enjoyed this perennial favorite. Gary Kemp, the genius behind the songs, from his station at audience right, struck a power position with his guitar, intensity and happiness on his face as he provided backup vocals.

Blade, perched on a stool in the front corner, asked Martin Kemp about performing together again, Kemp explaining that he has the most fun with these guys, gesturing to the band. Drawing a response of "awww" from the bleachers including some good natured ribbing from Hadley, Blade pointed out that Martin had been smiling the whole time that they were playing "Communication" and Martin expounded, his face open and proud, complete with a wide grin. "Yeah, this is the highlight of my life. Absolutely, "he explained, handsome as always." You can have a lot of fun acting, a lot of fun directing but you're on your own when you do those things. If you get success, you have to go home on your own and have a glass of champagne on your own," he laughed. "With these guys, you have success and you can enjoy it together, which is a lot of fun."

That sense of fun is apparent in the camaraderie between the members, the smiles while they played, the joy on their faces. Watching Hadley belt out the first lines of "Gold" and holding everyone's attention as he sings "oh, but I'm proud of you, I'm proud of you," it is clear. Keeble holds the drum sticks high in his hands waiting to jump in and lead the charge. Norman looks lost in a dream, his boyish good looks satisfied as he plays the congo drums fiercely. Gary Kemp digs in and plants his feet firmly, strumming the guitar. Martin Kemp raises his hands in a peace salute and there is a feeling of harmony. Spandau Ballet is in sync, truly an orchestrated dance not unlike a ballet that only a band of brothers, literally and figuratively could pull off. History meets modern day as they played "Steal," a new track that immediately feels familiar and exciting all at once. Rounding out the set with the ever popular "True," it is apparent that the boys are back. And we are truly the lucky ones.