By IAN PATTERSON
September 14, 2006
Sign in to view read count 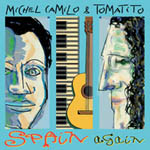 Almost seven years have passed since Michel Camilo and Tomatito came together to record the multi-award-winning album Spain (Verve, 2000). That recording placed these outstanding musicians in the rarefied company of those who have successfully joined piano and guitar in a duo context and produced music of rare beauty: Bill Evans and Jim Hall in the world of jazz, Horacio Salgan and Ubaldo de Lio in the world of tango, and more recently, Pamela and Robert Trent in the classical world. It is not an especially long list. The formula that worked so well seven years ago, a blend of Afro-Caribbean colors, tango, jazz and flamenco, is largely repeated here, as the title, Spain Again, unambiguously suggests.

The opening number, Carlos Gardel's achingly beautiful and nostalgic "El Dia Que Me Quieras, could bring a tear to a hangman's eye. Three classic pieces by Astor Piazzolla, "Libertango, "Fuga y Misterio and "Adios Nonino, allow Camilo and Tomatito maximum range of expression, and guitar and piano lines weave in and out of each other like the sure footsteps of a tango couple. Camilo's "Twighlight Glare shows him to be a composer on par with the Argentinian maestros; here the duo marries sensitivity and emotional intensity to wonderful effect.

The general mood of the album is more restrained and nostalgic, than their previous recording together, although the temperature rises a notch on Chick Corea's lovely "La Fiesta, with its playful dancing rhythms, and the album finally comes to a boil on Camilo's showstopper, "From Within. A tender ballad, "Amor de Conuco, penned and sung by Juan Luis Guerra, closes the album as it began, with composition and taste taking precedent over flamboyance. This little gem of a song is reminiscent of the golden era of Silvio Rodrigo.

Of the eleven songs on the album, seven are interpretations, and the two Camilo compositions are reworkings of material from previous recordings. Only "A Los Nietos and "La Tarde, both by Tomatito, are new. It seems like they could knock out this sort of material indefinitely. As wonderful as the music on this album is, it would be a fascinating project if they were to follow this up with an album of completely original compositions. It couldn't fail to be anything short of majestic.

Visit Michel Camilo and Tomatito on the web.