Sun Ra: Space Is The Place 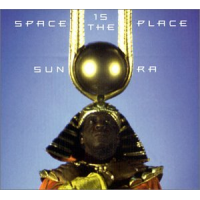 He was a solar flare, a surge of energy that rocketed across great distances and divides, bestowing all he encountered with unforgettable memories and disrupting radio transmissions. Science-fiction, transcendentalism, and jazz coalesced in the being called Sun Ra. A radical concoction, sky-bound and heaven-sent.

Ra's music was always stratospheric, always reaching above and beyond. His constant striving resulted in an abundance of stellar records. But as a sonic statement and philosophical manifesto, 1973's Space Is The Place stands out as unique in a catalogue remarkable for its singularity.

"As all marines are riflemen, all members of the Arkestra are percussionists," reads the album's reverse. And all of the players on Space Is The Place —be they saxophonists, vocalists, drummers or trumpeters—prove that they each possess a hold on rhythm to make any musician drool with lust. The five tracks vary between complex polyrhythms, big-band swing and arhythmic onslaughts. Ra may not take a mallet to his space organ, but he is no less a master of the beat than the finest drummer.

And lest we forget, "Images," track two, proves that the piano is a percussion instrument. Ra's piano playing over the understated bass line and shimmering cymbal-beat is a masterclass in utilizing dynamics to emphasize the pulse. Pounding the root chord on every alternate downbeat while teasing/tearing the melody from the keyboard, Ra gives his mastery of the ivories the spotlight. Its rightful place, often lost beneath the intergalactic weirdness of his work.

When the horns take up the tune, "Images" shifts from merely masterful to exquisitely original. The barest hint of dissonance sets the track lurching in its big-band swing. Like an ice-cream truck with a broken, tinny tannoy or Stanley Kubrick's 1971 film, A Clockwork Orange, the effect is disturbing yet mesmerising. As if the great python Kaa is working his hypnosis on us Bandar-Logs. Luring us down his throat.

"Sea Of Sounds," track four, is an odyssey across stormy clashing oceans. It is the sound of waves breaking on rocky stereos, where every instrument talks over and contradicts the others. Even the introduction's descending bass line, the only handhold on this vertical climb, struggles to be heard over the cacophony, eventually seeming to throw its hands to the sky before surrendering to its surroundings, camouflaging itself with the hallucinogenic technicolours.

Void of a discernible beat, melody or structure, "Sea Of Sounds," embodies the random beauty of raging waters. Where it is not, the patterns enthral and enrapture the curves, contours, corners and edges that last for but a fleeting moment before dashing themselves on the shore. Never to be repeated.

"Art does not begin with imitation, but with discipline," as Ra himself said. And his space organ solo on track three, "Discipline," highlights the truth in that statement. It is electric, but still undeniably jazz. Never darkening fusion's doorway but casting fresh lights on the music's deep-buried roots.

"Discipline," could almost be a preface to "Sea Of Sounds." The horns say one thing while the flute tries to prove them wrong and the drums struggle to get a word in edgeways. But the slower, almost staggering tempo keeps the track spacious, unlike the frantic clutter of "Sea Of Sounds." All these contradictory instruments however keep "Discipline" from sounding disciplined, as if the barflies' argument is winding down at last orders. The track's saving graces are Ra's organ interjections: Smooth and delicate in contrast to the Arkestra's clumsy, almost ham-fisted playing. It's a rare moment in Ra's discography: They sound chained instead of liberated. What should be intergalactic, is earthbound.

Where "Discipline" lumbers along with soil between its toes, closing track "Rocket Number Nine" shoots for the stars but crashes from the heavens still well inside the stratosphere. Saxophones sputter and squawk like failing engines. And repetitive, layered vocals trip over each other like a shuttle's panicking crew. Even Ra's disjointed organ motif can't lift "Rocket Number Nine," from the earth's surface and out of its crash-landing crater.

But the looping groove of the album's opening title track, the interweaving strata of sound that builds not to a climax but to a whole, raises the listener up and beyond. Ra's mission was to elevate humanity up to "other planes of there." And in the 21 minutes of transcendental music that is "Space Is The Place," the set's title tune, the presence of a future paradise is felt. The drums forsake the beat to adventure around the steady groove of the horns. The three sets of vocals—two singing and one hollering excitedly—weave in and out of each other, never obstructing the others' movements. Saxophones ecstatically screech to the heavens, pitching themselves beyond the realm of tonality into the land of the impossible. Ra once said "The possible has been tried and failed. Now it's time to try the impossible." On "Space Is The Place" he proves that the impossible can not only be successful, but is necessary.

"What is now proved was once only imagin'd," as the poet-prophet William Blake wrote. "Space Is The Place," in its uniqueness, scope and vision, is Blakean: The impossible is just out of grasp but it intends to reach it. It knows that there is a universe beyond what we are aware of. And reaches for it. Braving ridicule and neglect, Sun Ra achieved, for 21 glorious minutes, exactly what he set out to do. He didn't drag the cosmos to earth. He brought us to the heavens on a tower of song. It's a strange song. But the impossible will always be strange. Until it is made possible.

And then, it begins anew: The impossible strives to become possible. And that groove loops on. Circling around the Sun Ra.