Space Is The Place

Throughout the epic, you get to experience the culture of '70s Oakland. Lots of hair--including one of the biggest Afros ever to appear on film--funky outfits and platform shoes, urban decay, and a strong sense of ghetto community 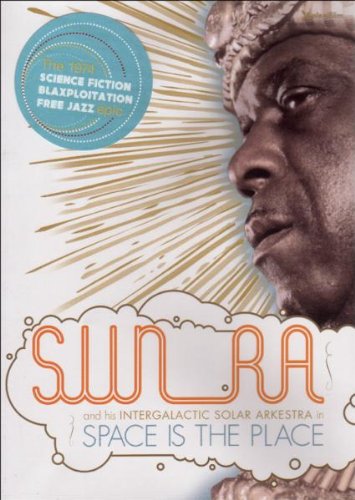 There's so much mystery and intrigue surrounding Sun Ra that it's quite hard to discern his identity. Was he really from Saturn? Biographer John Szwed, author of the book Space Is The Place, made big strides in revealing the forces at play behind the bandleader's mystical vision. But Ra's music has mostly been lost in obscure, independent, out-of-print releases—though lately much of it has been unearthed and seen the light of day.

Sun Ra led large ensembles known under various names, including the Intergalactic Solar Arkestra featured here. The film Space Is The Place (not specifically associated with Szwed's book of the same name) was Ra's primary opportunity to bring his Afrocentric message to Earthlings on the big screen.

Upon its release in 1974, the film was briefly shown in San Francisco and New York, only to disappear for two decades until a corrupt VHS release came out in 1992. The DVD under consideration here contains the original director's cut, plus 16 minutes of highly random home movies which illustrate the group at play. It is the definitive Space, a fitting 30th Anniversary salute.

The story goes like this. Ra lands his space craft in Oakland circa 1972. He gets out and reveals himself in all his glory to innocent ghetto dwellers as "the presence of the living myth." They get all confused by his weirdness, which includes huge, funky Egyptian headwear and robes. Intermittent flashbacks relate a cosmic battle between Ra and a flambuoyant pimp known as the Overseer, which frames the story as a balance between judgment (Ra) and corruption (the Overseer).

The Overseer (Ray Johnson) introduces materialism, sexism, deception, and all sorts of nasty whiteness into the black community. A pair of idiot NASA agents track Ra throughout the story in order to figure out his secrets, eventually capturing him and tormenting him with white music. The grand finale presents Ra in full regalia, leading his Arkestra through a noisy declaration of his philosophy.

At the end Ra takes off in his ship and brings a few lucky black souls with him. Concert footage, in all of its convoluted free jazz energy, appears on and off throughout the film, appropriately framed in context. (Music is, after all, the fuel for Ra's intergalactic travel.) Sorry to give the story away, but it's nothing if not predictable.

Throughout the epic, you get to experience the culture of '70s Oakland. Lots of hair—including one of the biggest Afros ever to appear on film—funky outfits and platform shoes, urban decay, and a strong sense of ghetto community. Make no mistake: this part is entirely real. The acting is pretty miserable for the most part, especially on Ra's part, but it's redeemed by a few crystalline moments where deep philosophy collides with social dynamics. Theatrical brilliance is just not part of director John Coney's (low budget) vision, but it doesn't really matter.

The troubling thing about Space Is The Place is its outright racism. Ra plainly states that he is not only solely concerned with blacks, but actively antagonistic to white culture. (The very name of the Overseer recalls slavery in a rather blunt fashion.) It's ugly. Very ugly. All the mystique, cosmic consciousness, and drama fail to hide the fact that Sun Ra is a straight up racist.

Speaking as one of the white persuasion, I have to say this fact fundamentally mars the film. I've studied and written a lot about African music, and I love its New World relatives, so there's no shortage of enthusiasm on this end for black culture. But no, that part of the film isn't good.

This brand new DVD release comes with rather insightful notes by Thurston Moore, John Szwed, and director John Coney, plus a bunch of home movies (16 minutes) from Egypt showing the Arkestra in action. It comes from an original film reel and you get to experience the usual lines and blips associated with that medium, but the colors are brilliant and the presentation does not lack in clarity.

In the end the film is a mixed bag, though every Sun Ra fan will undoubtedly run out to snatch it up. I highly recommend checking it out. But other than the music, the colorful culture, and many deep metaphors of time, space, and morality, this film offers more hate than love.

Sorry, I just don't dig that.

Important note: This DVD has a strange quirk. If you play it on a personal computer, you will probably need to perform a special tweak to make it work. Just transfer the video folder to your hard drive and open it from your DVD player. (You should have no trouble playing it on a dedicated DVD player.)