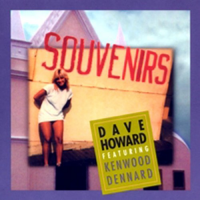 An overall excellent disc by a creative, challenging ensemble with some innovative ideas. This album perhaps doesn’t get off to the best start, as the opening track is steeped so richly in the Pat Metheny Group’s oeuvre that Howard comes off as a mere wanna-be. The guitar tone, cymbal shimmers and wordless vocals just scream, “Metheny made it big like this, so can I!” Fortunately the band redeem themselves on the fun second track, “The Change”. Dennard, a former sideman of Lew Soloff and Jaco Pastorius, kicks the tune off with bouncy, boinging jaw harp that is soon supplemented by bluesy guitar. The tune eventually settles into a firm blues chug that deeply satisfies.

Given several song titles and the Continental feel to some selections, Howard must have derived much inspiration from a trip to Italy. “Calabria” includes more of Arthur Blume’s vocals, thankfully more akin to Bonfa or Nino Rota than Metheny this time around, and the melody is notably lovely. Bassist Stinnett remains right in the pocket on most tunes, extending into funkiness when needed and laying down some ecstatic decoration on tracks like “Threesome”. Dennard is a perfect foil all around, one of the most balanced drummers in the business when he’s on top of his game. The eminently refined pianist Larry Boyle doesn’t appear on every track, but is used to fine advantage to round out the jazzier pieces.

Howard’s guitar playing is generally tasteful and informed, his ideas move in suitable and often unexpected directions, and his compositions are pretty interesting. He achieves a nice “blooming” archtop tone on the less bluesy pieces, and uses the guitar synth with appreciable discretion. Aside from the questionable first track, Souvenirs is an excellent, worthwhile effort by a guitarist who shows considerable promise for the future. Recommended.