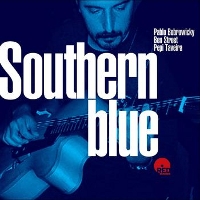 Argentinian guitarist Pablo Bobrowicky has a beautifully unadorned and organic tone, as naked as an electrified guitar can be. He makes it a point not to hide behind reverb, sustain, or overdrive, producing a plectrum sound halfway between electric and acoustic. On Southern Blue, his fourth Red Records recording as a leader, Bobrowicky returns to the trio format he so successfully led on 2001's Where We Are (Red Records), spinning out an excellent collection of standards and originals, rendered like a fine, aged wine.

Bobrowicky's opening tune is an original, "Sos Vos?," based on the harmonic structure of the jazz warhorse "All The Things You Are." In the greatest of jazz traditions, the guitarist transforms the original standard by expertly tinkering with the tempo, time and chords. In doing so, he creates something new altogether: an elegant and swinging tribute to the original. More than with a piano trio, the guitar trio lays plain the "space" in music with which Miles Davis was always so obsessed. Bobrowicky sharpens this with clean phrasing devoid of Joe Pass cum Art Tatum 64th- note ejaculations that, while impressive, can clutter a good melody. In this case, less is more. This music is as clean as a whistle, smelling of pine.