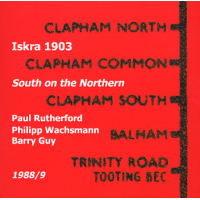 Paul Rutherford's trio Iskra 1903 existed in two different editions, both including Rutherford on trombone and Barry Guy on bass. The first (in existence from 1970 to 1974) added Derek Bailey on guitar, the second (from 1977 to 1995) Philipp Wachsmann on violin. Thanks largely to the efforts of Emanem (with a contribution from Guy's own Maya label), both editions have been well represented on disc, excellent news given the importance of the group in the development of improvised music and the uniformly high quality of their music. However, the second edition has been well-documented at the start and at the end of its eighteen-year existence, but with an eight-year gap from 1983 to 1991. Now, with two previously unreleased live recordings, dating from November 1988 and April 1989, the two-disc South on the Northern begins to plug that gap. All of which makes it a very important and welcome new release. In other areas of the arts, the nearest equivalents would probably be the discovery of a previously unseen Hitchcock movie or Stoppard play...

As the album and track titles indicate, South on the Northern was recorded at gigs in pubs in London—Balham and Clapham Common are both southern suburbs of the city which lie on its underground system's Northern line, while The Bedford and The Sun were the pubs in question. Both gigs were captured on analogue audio cassettes by Wachsmann, but the music on the discs does not betray that fact, with the sound quality throughout being exemplary and revealing every essential detail but no extraneous noise.

Right from the first notes, the music confirms that the gap in the group's discography had nothing to do with a drop in the quality of their music in that period; individually and collectively the three players are all at the same high standard they displayed on Chapter Two (Emanem, 2007), which documented their 1983 UK tour, and Frankfurt 1991 (Emanem, 2001), the title of which speaks for itself. In typical fashion, the sound of Rutherford's trombone constantly commands attention, as he sings songs full of drama, emotion and pathos through it. The gentleness and lightness of his playing makes the music defy gravity and belies the stereotypical reputation of his instrument. Suffice to say that when he and Wachsmann trade phrases it feels as if the trombone and violin were made to be played together—the most natural pairing imaginable. This is most evident in passages where they are at their most restrained and poignant.

Similarly, the three players make the combination of trombone, violin and bass (plus understated electronics) seem entirely logical, and the absence of drums an irrelevance; their music has its own irrefutable logic and pulse, dictated by nothing but the three of them, their interactions and reactions to one another. The quality of their music never wavers, so they maintain an impressively high standard throughout. Altogether, this is two and a half hours of the best improv available. Stunning.