By JULIAN DERRY
January 9, 2004
Sign in to view read count 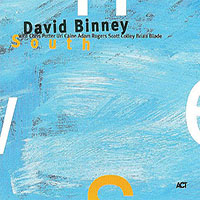 South is a hauntingly beautiful album of outstanding compositional innovation. The sheer angularity of the opening horn phrase is like tiptoeing across an exposed arete, the cymbals nervously fluttering wisp-like at your heels, the thinnest melodic bridge that leads you to the relative safety of the song's harmonic center. Here you hunker down, comforted by the warm tones of a gently cascading guitar motif brilliantly set against parallel-running streams of intoxicating saxophone. It's a triumvirate amongst many libationary moments. In fact, the whole album makes you dizzy.

Soft complex textures trade places with raucous screaming solos. Rich horn arrangements belie the modernity of this recording. The same worn out path or a new direction? Neither. An able and ample continuation of the layered sublimity derived from Miles Davis' late electric period and culminating with John McLaughlin's genius post-bop The Heart of Things.

Musicianship is paramount. Complexity emerges from great orchestration. Catchy hooks and whistle-able humdinger melodies open into freer heart-wrenching loquacious solo sections. Binney and Chris Potter scream and scorch their way through Kenny Garrett-esque frenzy. Adam Rodgers gets to tip his overdrive pedal and Scott Colley and Brian Blade, and sometimes Jim Black, pound like a gale against the tent wall, incessantly driving the ferocious rhythm, exciting and propeling the weaving soloist through a chicanery of brotherhood: transience; a dynamic fraternity of fleeting bedfellows interspersed amongst polyrhythmic peaks.

That's not to say the music is never calm, collected, even calculated. The quieter passages better suit the relatively straight-laced Uri Caine, and also provide a platform for rest and a moment's breath. But it is only for a moment, and we are soon up again kicking in to the next slope, transporting to new musical heights on this leviathan of modern jazz.