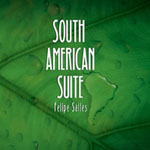 Rapidly changing rhythms, crisp ensemble playing, a broad sonic feel and unique voicings define South American Suite, an adventurously composed look at Brazilian music from multireedist/flutist Felipe Salles. While he draws on Brazilian music, Salles eschews the breezy bossa beats that are typically associated with that country's jazz intercourse. Instead, he utilizes lesser-known styles such as choro, frevo and baião to inspire new extended compositions and advanced arrangements for a distinctive take on Latin jazz.

In addition to Salles' cadre of saxophones, clarinets and flutes he has assembled an octet that is able to sustain the harmonic beauty of these pieces while not sacrificing their complex rhythmic underpinnings or the elegance of their form. Percussionist Rogerio Boccato, drummer Bertram Lehman and bassist Fernando Huergo impart subtle coloration or maintain fiery rhythms while flutist Jacam Manricks, trombonist Joel Yennior, violinist Laura Arpiainen and pianist Nando Michelin can perfectly perform a classically motivated chamber-like voicing and then immediately shift to any of myriad styles demanded by these compositions.

Salles most impresses on tenor with a style that at times draws on Trane signifiers either to soar above the fray or set a specific frame of reference. Perhaps more important though is the stated influence of Hermeto Pascoal. Refreshingly though, the real star of this program is the suite itself with the arrangements, flexibility of the octet and Salles' broad musical vision taking center stage.