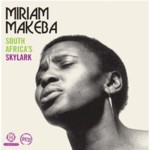 As was the case with her mentor, partner and fellow social radical, singer Harry Belafonte, South African-born singer Miriam Makeba's breakthrough international hits were sunny, folk-based pop singles devoid of the explicit political content which would later inform much of her work. Belafonte scored with the calypsos "Banana Boat Song" and "Island In The Sun" in 1956-57. Makeba with "The Click Song" and "Pata Pata" shortly after arriving in the US in 1959. The discs made Belafonte and Makeba hugely popular with well-to-do, white audiences, but the two musicians' soon to be revealed political activism created deep and, in some quarters, still unresolved tensions.

Makeba, whose South African passport had been revoked in 1960, went on to marry the polemicist and Black Panther Stokely Carmichael in 1968. The furor this caused led to Makeba's rejection by the mainstream US music business, and with Carmichael she moved to Guinea in West Africa. Two decades of African and European exile followed, before, with the urging of Nelson Mandela, Makeba returned to South Africa in 1990. She died in 2008, onstage in Naples, Italy, during a concert protesting at the murder of six Ghanaian immigrants. She was 76.

The compilation South Africa's Skylark brings together the several strands of Makeba's career over two, generously packed CDs. The first, subtitled "Traditional & Classic Miriam," focuses on the mid 1950s through the late 1960s, with recordings made in South Africa, the US and Guinea. The second, "Funky & Socially Conscious Miriam," concentrates on Makeba's later recordings, most of them fusing soul and funk with South African styles and many of them with politically-inspired lyrics.

There's plenty of great music on the second disc, but it's the 25 tracks on the first—spanning folk, mbaqanga, township jazz and kwela—which contain the greatest and most singular magic. Makeba's pitch perfect, strong and clear, ever swinging voice is typically presented over simple but well arranged, small group arrangements: strummed acoustic guitar, double bass, heavily syncopated kit drums played with brushes, a group of backup singers and, infrequently, a clarinet or penny whistle. Occasionally, as on the lovely "Back Of The Moon," from the 1959 South African musical King Kong, the lineup is augmented by a horn section. The music is timeless and mostly well recorded, and the disc a delight.

The omission of any recording or personnel data, however, is inexcusable. Most of this information is readily available to researchers and an artist of Makeba's stature deserves better liner note annotation than an enthusiastic essay from the album's compiler. That said, South Africa's Skylark is a welcome release.