Jen Shyu and Jade Tongue: Sounds and Cries of the World

By HRAYR ATTARIAN
October 19, 2015
Sign in to view read count 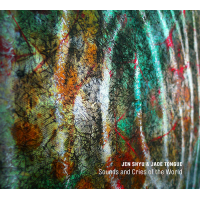 Vocalist and multi-instrumentalist Jen Shyu's Sounds and Cries of the World is both raw and sophisticated, fiercely compelling yet intimately fragile and, above all, terrifyingly beautiful. Her sixth album as a leader, it is a collection of seven original compositions and three folk melodies all inspired by the traditions of Korea, Indonesia and East Timor.

The exquisitely realized music balances the spontaneous and the choreographed resulting in a superbly dramatic effect. On the dreamlike "Moxa," for instance, Shyu and her band-mates create an impressionistic ambience. Bassist Thomas Morgan's pizzicato falls like rain drops while drummer Dan Weiss lets loose rolling thunderous beats to haunting effect. Shyu's ethereal and plaintive singing remains at the core of the tune delivered with sublime poetry.

Shyu also plays a variety of instruments. In fact her percussive piano chords emphasize her fiery incantations on the contemplative and fervent "Rai Nakukun Ba Dadauk Ona." Maneri engages first Shyu then Akimnusire in intense and acerbic duets while Weiss and Morgan percolate in the sonic backdrop.

An imaginative and singular artist, Shyu continues to restlessly innovate. By intelligently bending genres, blending styles and erasing musical boundaries she is redefining what it means to be an improviser