By FLORENCE WETZEL
October 12, 2011
Sign in to view read count 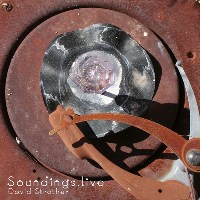 The Japanese term mono no aware means "the pity of things," a reference to the gentle sadness that results from acknowledging the impermanence and transience of life on earth. David Strother's beautiful EP, Soundings.live, evokes this quality throughout. Strother has created six aural haiku using the unique combination of a five-string electric violin and sounds from the streets of Los Angeles.

Strother displays admirable restraint throughout the EP, tastefully merging his violin with a variety of street noises. He captures the rushing sound of a car passing by, but often drops it into the background so it seems like a distant ocean. Occasionally human voices emerge, but they are gone as quickly as they came, disappearing into the silence from which they emerged. In fact, this whole EP has a wonderful quality of something half-glimpsed; there's an appealing spaciousness to the music, an elusive texture that's open-ended and haunting. On each track, Strother plays with the greatest sensitivity and gentleness, producing a variety of sounds including melodic lines, plaintive inquiries, or far-away screeches that sound like yearning.

The beauty of these sorts of projects is that they bring to the fore interesting questions such as: What is music? What is sound? All music is sound, but is all sound music? Innovators such as John Cage opened the door to these queries decades ago, but each generation needs to find its own answers. Strother's response has yielded exquisite music with a lovely purity and a lingering, liminal quality. Like everything else, music comes and then it goes; but during the moment that sound abides, it creates a spark of life that's all the more precious for its transience.

improv w/car horns; the next room; so I never ever ever; almaraz; angeles lost; soledad.