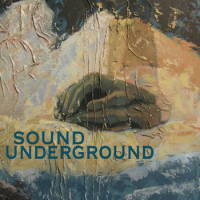 Formed in the autumn of 2013, Sound Underground is a trio of young roommates who at the time were studying at the Frost School of Music in Miami, Florida: guitarist Jonah Udall, trumpet and flugelhorn player Alec Aldred and alto saxophonist David Leon. They say they formed Sound Underground as a natural extension of their shared passion to create music together. Refreshingly, they did not feel the need to follow convention and add a bass-and-drums rhythm section to their instruments; the resulting uncluttered, openness is one of the key strengths of their music.

A trio combining guitar, trumpet and alto saxophone is not a well-trodden route, but the three fit well together, creating a fresh sound that is compatible with the members' clean-cut, fresh-faced appearance. Think West Coast cool and you have an inkling of the zone we are in here. Incidentally, Udall is from Berkeley, California, Aldred from Waukesha, Wisconsin, and Leon from Miami, Florida, itself.

The group's debut album runs for a comfortable fifty-two minutes. Of its twelve tracks, eleven are original compositions, seven by Udall and four by Leon. The remaining track is a boppish version of a Charlie Parker segment which is atypical of the album as a whole but may be a signpost to future ventures for the group. Across the album, the absence of bass and drums puts the onus on Udall's guitar to keep the rhythm while also providing chords to accompany the others and contributing the occasional solo himself, all roles which he manages with aplomb; after repeated listenings, the sound of his guitar remains memorable.

There is an equal balance between the trio's members; without any one of them, the music would not be as good as it is. All three are soloists capable of grabbing a listener's attention and holding it indefinitely. The compositions are well constructed and executed so that the transitions between themes and solos feel pleasingly natural and unforced. From first note to last, this is a highly enjoyable album that leaves one thirsting for its successor.

In the summer of 2014, the trio embarked on a self-organized tour of Bulgaria and Serbia, as evidenced by the YouTube clip below of their assured performance at the Bankso Jazz Festival. On the basis of that and this recording, Sound Underground is definitely a combo to watch out for. They have a very bright future.