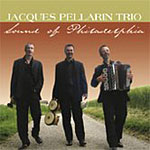 Sound of Philadelphia is not a novelty record—one that some critics might dismiss as world music. Jacques Pellarin's music is inflected with myriad cultural influences, so this rather empty epithet is likely to be used on the composer. This labeling is especially tough on an artist who is as seriously talented as the French/Basque musician. Pellarin is a master of the bayan, a Russian, chromatic button accordion developed in the early 20th century that is deceptively easy to play, and while the instrument may conjure up the classic sound of South American tango, in this case, nothing could be further from the truth. Pellarin is a bold innovator and is blessed with a rare genius. His music is vivid, changing and surprising, awakening the once whispered suggestion that the French introduced jazz to America.

The accordion has a relatively shrill sound, but Pellarin also exhorts from his magically endowed bellows a gruff timbre, creating an inner duet between the low male and high female voices. They pirouette around the broad, rectangular reeds and the horns of Diego Fano, who taunts the accordion as a modern snake charmer would a pair of serpents. Percussionist Yann Pajean magically transports the singing and dancing conjunto across the Mediterranean, North Africa and, yes, to the streets of Philadelphia, where the music melds into the swinging idiom of urbane jazz.

Pellarin has listened to musicians from Astor Piazzolla and Dino Saluzzi to the tonal textures of Duke Ellington and the modal exploits of McCoy Tyner, but he has a gravitas all his own; his singular voice reflects a Basque sensibility with a rough, somewhat pastoral, gentility. To that extent, Pellarin's blues is as authentic as a Delta drawl. The musician has a modern approach that is eternally old but also elastic and new. His compositions are a tad noirish, and this often drives the timbral elegance of his music. It is splendid when pieces like "The Groove Maker" and "Accordeason" take on a cinematic sweep and appear to traverse across the vast canvas of an impressionist soundscape.

The Pellarin Trio's music also has a broad swing, which is gentle on "Junior Valse" and "Free Tango"—the latter giving notice that there is a new pretender to the tango throne. Fano and Pajean have learned these complex charts well and mastered their twists and turns, especially those compositions with exquisitely written melodic bass lines. In that vein, the masterfully written allegory, "Recuerdos de la Macha," recasts Miguel de Cervantes' Don Quixote (1847) with a harmonic chorus. Listening to this work, bassist Renaud Garcia-Fons comes to mind, for his and Pellarin's rare Herbie Nichols-like ability to write melodic bass lines. This is a stellar record filled with emotion that reaches parts of the soul where much music fails to go.