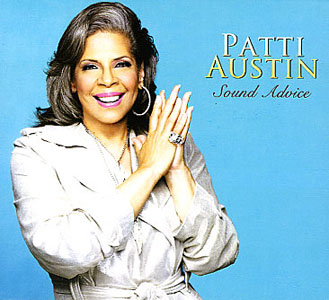 Sound Advice is Patti Austin's first pure pop album in ten years and, as a vocalist, Austin has always moved easily between genres. Austin excels when she's paired with a producer who can bring out her strengths and the material matches her ability. The Real Me (Qwest, 1988) was an example, where the singer and the songs were perfectly matched, but this time around Austin has chosen songs that don't compliment her.

Whatever else Austin is, she's no rock singer and she proves it with an utterly wrongheaded take on the The Rolling Stones "You Can't Always Get What You Want," followed immediately by Paul McCartney's "Let 'Em In" and Bob Dylan's "Gotta Serve Somebody." Within that trio of tunes by classic rock acts lies the problem that ultimately sinks Sound Advice : Austin often has no feel for the material, and comes across as stiff and forced.

Rock is as much an attitude as it is a style of music. Austin is game, but she can't pull it off and keyboardist Greg Phillinganes' unimaginative arrangements don't help matters. "Victor" is a leaden dirge, with Shelly Berg's sparse piano accompanying Austin's dreary delivery, alternating between being tedious and ponderous. Classics such as "My Way" and "Lean On Me" might seem to be squarely in Austin's comfort zone, but they are botched by trite arrangements.

The risk involved in covering well-known songs is that they won't improve on the originals, but the least an artist can do is try to put his/her own individual stamp on it. When Austin and Peabo Bryson tackled "The Closer I Get To You" on Fourplay's Elixir (Warner Bros, 1986), their version may not have surpassed the Roberta Flack/Donny Hathaway original, but it was a worthy interpretation, not a pale imitation.

Sound Advice bottoms out on Depeche Mode's "Enjoy the Silence," which sputters along as Austin drones in a stilted monotone that's meant to invoke detachment, but only comes off as dullness. Austin has mastered Ella Fitzgerald and George Gershwin, but figuring out European synth-pop seems to have baffled her.

It's hard to say exactly what went wrong here. It isn't as if Austin has lost anything as a vocalist; it's more that she never really embraces the material as she did on The Real Me, and without being fully engaged to the songs she can't fully sell them.

You Gotta Be; By the Grace of God; Round and Round; You Can't Always Get What You Want; Let 'Em In; Gotta Serve Somebody; Vincent; Lean On Me; Give It Up; My Way; Enjoy the Silence