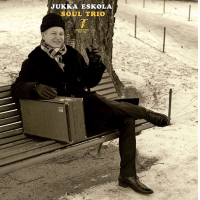 Jukka Eskola is a Finnish trumpeter, well known among Scandinavian audiences particularly from his membership of the now inactive but well loved Five Corners Quintet. In fact despite the band's title, only four of the ten tracks on offer here feature only the Trio, and of the rest two actually feature a majority of the Quintet's members.

With the addition of Ville Herrala on bass and Magnus Lindgren on flute, playing 'Railyard Boogie' the band sounds very like a recreation of the Quintet's tight groove. However most other tracks show the power that a Hammond organ gives to an ensemble, as well as the feel of a true 1960s groove. Mikko Helvelä is in charge of the keys and varies that punchy, velvet sound as well as with dreamy washes like on 'Subterranean Variations.'

This is one of the seven tracks written by Eskola and fellow Quintet college, drummer Teppo Mäkynen. The predominance of the drummer's name in the credits indicates that he is as involved in this product as in the Quintet. 'For Anne Lee' features his nifty one minute drum solo, before breaking back into a typically perky extended organ break.

But the most constant feature of this album is Eskola's lyrical trumpeting. He is a master of many styles, although is main approach is a crisp mellow profile that melds perfectly with Mäkynen's light brushwork. Devotees of the Five Corners Quintet will definitely enjoy this selection of tracks that also includes a piece each by Duke Pearson, Oliviera and Ortolani and by Mercer Ellington.