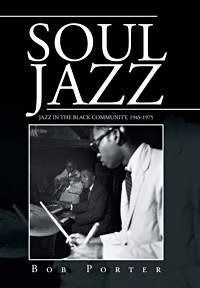 With the end of World War II, in 1945, there was great rejoicing and celebrating a triumph over evil, as the United States ushered in a new era. But with segregation still the norm, in the shadows of Black America, things remained the same. The black communities had their own support groups, their own heroes, and they had their music. Soul Jazz is about the musical changes in these communities from 1945 to 1975. How the diverse methods of playing, and attitudes toward the music, affected the music business, focusing on the adjustments musicians made in maintaining jazz as a viable and vibrant art form.

The book takes the readers from what was labeled as race music, in the mid-forties, and the big band era of Duke Ellington and Count Basie, to the small combos which made major impacts as those of Louis Jordan. Tenor giant Illinois Jacquet is given ample credit for his innovative style and technique, representing the great side men who came out of the swing bands, and struck out on their own. A saxophonist possessing a commanding tonal presence, coupled with advanced interpretive ability, Gene Ammons also receives the royal treatment he deserves.

By 1949, the term rhythm and blues was widely used to identify the music, and the 45 rpm record was introduced, which would revolutionize the industry, especially radio. The fifties offered the long playing record, allowing more music to be available on one disc. The rise of the honking saxophone stars and bluesy piano sound culminated with the inimitable Ray Charles, whose Atlantic recordings, (with three-saxophones/two trumpets) altered the course of the music dramatically. Soul jazz was created from a swing and rhythm and blues foundation, and combined with gospel and modern jazz. It became very popular in the black community as it was music made for entertainment, with great appeal to a live audience, and perfectly suited for radio airplay.

The sixties revealed many positive changes, there were several labels owned and operated by black entrepreneurs, and many other labels were exclusively recording and marketing for the burgeoning black music market. Blue Note and Prestige were considered two of the most prominent, with an impressive stable of artists releasing quality material which are now considered classics, representing the era well. Thanks to Jimmy Smith, as well as others, the success and popularity of the organ combo during this time frame is quite notable, and a trend which is popular again today. The decade ended with the landmark record Swiss Movement, by Les McCann and Eddie Harris, a prime example of soul jazz at its best. FM radio allowed for greater flexibility in programming, and albums could be played in their entirety, showcasing the music and artist like never before. Soul jazz would morph into fusion and funk, with electronic instruments taking the forefront in the search of new means of expression.

The club scene was drying up in the seventies, yet there were a few surprises on the jazz front as the CTI label brought a fresh perspective to the business, with some outstanding releases by Stanley Turrentine and Grover Washington Jr., though the company was not able to sustain its growth due to business and legal problems. The mainstay labels as Columbia and Warner managed to secure their hold and share of the market, and did quite well. By 1975 the Vietnam War had ended, and a lot of the jazz players were finding new opportunities overseas, which saw a slew of European labels spring up, as well as an appreciative Japanese audience base. But for all practical purposes, the golden age of American soul jazz was over.

Bob Porter has a lifetime of expertise in the music business, with an impressive resume as a jazz record producer, writer and radio host. His tenures with the Prestige, Savoy and Atlantic labels gave him invaluable insight into the inner working of the business and allowed him personal access to the musicians themselves. He presents a detailed look at some of those artists, and the times they lived and recorded in, with a special emphasis on their contributions and legacies. Soul Jazz represents a major reference source for those seeking information on the evolution of jazz when it was at its creative peak, and the musicians who made it happen.