Pieces of a Dream: Soul Intent

By WOODROW WILKINS
March 6, 2009
Sign in to view read count 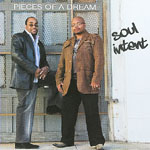 Some artists go back to their old favorites, either revisiting past recordings or covering someone else's music. Pieces of a Dream goes back to making music the way they did almost 30 years ago.

Keyboardist James K. Lloyd and drummer Curtis Harmon Jr. founded the group, associating closely with Grover Washington Jr. during the early years. In recent years, they've relied on long-distance recording with a heavy dose of programming. However, with Soul Intent, they go back to basics. Sort of. An assortment of side men, including bassist Bennie Sims, share in the songwriting process as well as the thrill of playing.

"Sway On" has a lighthearted groove that sets a fun, lively mood. Though the rhythm track is programmed, it sounds more in tune with the rest of the music than past efforts. Tony Watson Jr. plays sax, adding to the "urban" feel.

Rohn Lawrence's guitar gives "APB" a 1970s funk-jazz feel. Adding a live bass, played by Sims, with Harmon on drums and percussion makes this one of the more enjoyable selections. Eddie Baccus Jr. has saxophone duty. Some uncredited wordless vocals accompany the musicians during the chorus. The soprano sax solo has an edge to it, not unlike that of Grover Washington Jr.

The ballad "Hindsight" also sounds like a throwback to a bygone period. David Dyson takes over on bass, with Lloyd doubling on piano and electronic keyboard. Lawrence's guitar effects add to the soulful feel. This is one of the few tracks that has the sense of a full band. Lawrence also solos.

"Step On It," though only featuring Lloyd, Watson and guitarist Randy Bowland, also has more of a band sound, largely due to Lloyd's horn synth. The programming also includes a cool bass track, a factor often lacking with this type of production.

"Things Are Looking Up" is aptly named. With Lloyd, Baccus, Dyson, Lawrence and Harmon playing together, this bouncy, funky piece captures all the elements that make the rest of the album click. Baccus makes the sax wail during his solo. For added measure, Harmon shows off on the drums in a call-and-response sequence that sets up the song's emphatic closing note.

On the surface, the production approach defeats the purpose of having everyone in the studio. The two founding members appear together only four times in 11 songs. The rest of the time, it's the James K. Lloyd show or the Curtis Harmon show, with some valuable contributions by Sims. Even so, the thought behind the title cannot be overlooked. Despite any misgivings about programming, Soul Intent is Pieces of a Dream's finest effort in several years. The writing and the leads are always excellent, but slight changes in how the programming is done make the difference between pleasant and excellent.

Sway On; Vision Accomplished; Give U My Heart; APB; Hindsight; Soul Intent; Step On It; Things Are Looking Up; D Fuse the Situation; Stand Up; Anywhere You Are.