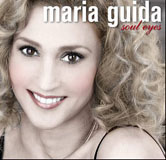 Guida shows an affinity for scatting and is at her best on John Coltrane's "Bessie's Blues," where she launches into a vocalese accompaniment to the melody prior to leaping into the scat improvisation. On other numbers, like Blossom Dearie's "Inside A Silent Tear," Guida displays a vibrato that may remind you of vocalist Morgana King. This aspect of her vocalizing is more evident on the ballads than the up-tempo compositions, tending to add a bit more friction. The album's centerpiece is the jazz standard "Soul Eyes," which is given a burnished ballad treatment with the assist of Horton's flugelhorn and Guida caressing the Mal Waldron lyrics.

Guida is a student of vocalist Sheila Jordan but does not bear a noticeable similarity as many of Jordan's disciples have exhibited. This allows for a lighter approach to the music that leaves the lyric message more easily stated. The closing Strayhorn classic "A Flower is a Lovesome Thing" is a perfectly good example, and Guida adds the infrequently heard ballad, the Adair/Dennis "The Night We Called It A Day," to the mix. All things considered, this is a good listen!

How Little We Know; Inside A Silent Tear; Bessie's Blues; Soul Eyes; Let's Get Lost; East of the Sun; Spring is Here; The Way You Look Tonight; The Night We Called It A Day; No Moon at All; Four; A Flower is a Lovesome Thing.