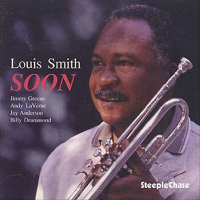 Fast approaching his 70th birthday, trumpeter Louis Smith made a minor splash with the two Blue Note records he led back in the mid ‘50s, only to then vanish under the cover of jazz pedagogy. To be exact, from 1958 to 1978 Smith did not perform or record as a leader, but was active as an educator in the Detroit area. Then, SteepleChase head Nils Winther brought Smith back to the recording fold in ’78 and a steady stream of releases has been the happy result.

While just one back from being his most recent date, Soon is nonetheless getting its first U.S. release and counts among the ten titles so far to be part of Smith’s SteepleChase catalog. Unpretentious hard bop is the order of the day, as with all of his previous sides, albeit with a professional assurance that makes for an absorbing listen. Smith himself seems to be fond of the lyrical school of trumpet playing, displaying a warm and burnished tone not unlike that of Kenny Dorham’s. Smith’s solos are clever and concise and he uses space extremely well. As for the rest of the crew here, none need an involved introduction save for possibly Jimmy Greene, all of about 21 years old at the time of recording and a few years shy of his current fame as a talented up and comer.

Aside from two bop-inflected Smith originals, the rest of the material is of the standard jam session variety. Be warned, however, that imbedded in the track “I Should Care” (which is timed at 18:15) is actually a whole additional performance of “I Love You,” although it’s not listed as such anywhere! Oh well, it’s a nice bonus from what is yet another agreeable session by one of the music’s distinguished elders.