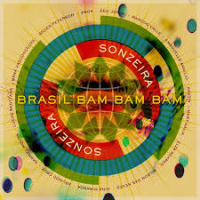 While roots linked to a sense of place are important, for music lovers the tunes that we first fell in love with, that formed our early tastes, can be just as potent. The late Laura Nyro called this "primal teenage heartbeat songs" and this superlative collection is Gilles Peterson's way of paying tribute to the Brazilian influence on his lifelong love affair with music.

You can join the dots to the young Mr.Peterson, immersed in the music of say Donald Duke or DJs like Robbie Vincent, in the light bossa nova take on Freeez's 1981 Brit funk classic "Southern Freeez." While the original had more of the melancholy of a cold day at the Caister Soul Weekender, shifting it to the southern hemisphere gives it a warmth and studied sophistication that works surprisingly well. If you liked the gorgeous Moon Bossa album by Julie Dexter and Khari Simmons a few years back this will be right up your street.

While this is all undeniably clever the album is more than one of those modish yet ultimately vacuous collections of new wave or leftfield classics of the 70s and 80s reimagined in the easy listening style of our parents. 'Sonzeira' roughly translates as 'big noise' and the rhythms on the likes of "Nana," "Sambaio" and "Xibaba (She —Ba- Ba)" in the first half of the disc are somehow joyous and ferocious at the same time. On "Nana" the way that the brass kicks in at around the 2 minute mark is both inspired and unexpected leading to further rhythmic twists and turns that build tension to the eventual climax. On tracks like "Sambaio" the rhythms are relentless emerging from the funky whistles and showcasing the sterling work of percussionists Zero Telles & Armando Marcal alongside Stephane San Juan's drums.

The track that has been getting all of the attention in the specialist press though is the new, minor key, version of "Aquarella do Brasil" which roughly translates as `Watercolour of Brazil.' This is a standard in Brazil and is sung here by the legendary Elza Soares who has a fascinating biography. She rose to fame in the 1950s on a TV talent show compered by the song's writer, Ary Barroso, but had never previously recorded it. If the anecdotes about that appearance are true, you could hardly blame her—Barrosso apparently drew attention to her impoverished appearance asking "what planet do you come from?." Unphased Soares shot back "planet hunger" before wowing the audience at home and in the studio with her performance. A star was duly born and the time that has passed has made her weathered, expressive, voice perfect for this melancholic take on a lyric that might otherwise have strayed into the overly sentimental.

Overall this is a collection picked with all the taste and good judgment that you would expect from Gilles Peterson. His love of the music shines through in the care and attention in track selection and pacing that makes it a pleasure to join him 'zipping up his boots.' The variety of styles should also be enough to satisfy the already committed Brazilian music lover as well as those with a more casual interest. The football World Cup may have ended prematurely for those on this side of the Atlantic, but this collection allows us to keep those dreams of Rio a little longer—standing as we do in the summer rain.