Volume Two tends to get short shrift in the Sonny Rollins catalog, but it's a terrific bop burner. 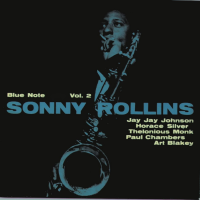 There are no bad records by Sonny Rollins, but some are better than others. This is one of the better ones.

Sonny Rollins Volume Two is, as the name suggests, Rollins' second recording for Blue Note. It's uniformly excellent with a fantastic band, especially the great J.J. Johnson on trombone and two tracks with the utterly unique Thelonious Monk.

If only the title were better.

That may be a dumb thing to criticize, but the name actually lowers expectations. Not only is it bland, but it suggests that this record is somehow related to Volume One. It's not. Though the two albums were recorded only four months apart—the first in December 1956, the second in April 1957—they are miles apart in quality. Volume One is enjoyable but not memorable. Volume Two is a barn burner with a completely different band.

The main difference? Start with J.J. Johnson, the first truly great bop trombonist. On Volume Two, Johnson and Rollins could be long-lost brothers. They are perfectly simpatico. When they play in unison on opening themes, they are playful and original—clear complements. And when they trade bars at the end of several tunes, sometimes with the wild Art Blakey, they are sublime.

Then there's Monk. Volume Two features a pair of Monk tunes, with Monk on the keyboards.

"Misterioso" is, to my ears, the highlight of the record—a 9½-minute track with plenty of curves and quirks. It's a slow-burning blues based on an odd ascending pattern. Rollins proves to be the perfect partner to Monk, exploring blues themes with Thelonious comping behind him in a slightly-less-than-orthodox way, playing unusual chords. It's powerful enough, but then Monk takes his solo. It's the usual Monk turn, full of unexpected notes and silences. Then Johnson puts his mark on the tune. And finally, when you expect the solos are over, here comes Horace Silver. Yes, a second piano solo by a different pianist, and so utterly different from the first that you know immediately it's not Monk. As the song comes to an end, the horns and drums trade bars, each trying out clever, original ideas. It is just about the perfect bop track.

Finally, there is Art Blakey—a force of nature that practically defines 1950s Blue Note hard bop. Here, as in many Jazz Messenger albums, Blakey is the propulsive backbeat that occasionally jumps to the front of the stage, whips the band into a frenzy, then jumps back. It's like a tornado that abruptly tears up the neighborhood, leaving you to wonder, "Where did THAT come from?" Volume Two is full of such moments.

Sonny Rollins Volume Two tends to get short shrift in the Rollins discography. That's understandable. Rollins had so many classic records in the 1950s, with so many bands and labels, that it's easy to lose track of one record, especially with a pedestrian title like Volume Two.

But this is a keeper—not just for Rollins devotees but for anyone who likes bop.

P.S.—Check out the classic Blue Note cover on Volume Two, then check out the cover of Joe Jackson's 1984 Body and Soul. Imitation really is the sincerest form of flattery.