By JACK BOWERS
December 5, 2006
Sign in to view read count 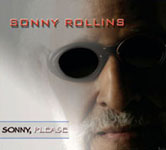 Am I alone in believing that Sonny Rollins, now in his 76th year, may have lost a step or two? Don't read me wrong; the man can still tame the tenor saxophone, let there be no doubt about that. But I fear he may have become a sort of untouchable icon, akin, for example, to Miles Davis, about whom seldom was heard a discouraging word, even though in his later years he produced scant evidence (in my opinion) of creativity or passion.

Rollins, named Artist of the Year and Best Tenor Saxophonist in '06 by Down Beat magazine and the Jazz Journalists Association, and winner of a Grammy Award for Best Jazz Instrumental Solo, has released his first studio recording in five years, Sonny, Please, which is, comparatively speaking, less gratifying—to me—than most of the others that preceded it. Even though there are occasional flashes of brilliance, there's far too much unproductive noodling, unstable intonation and treading water while foraging for inspiration to suit my taste. Well, that's Sonny, one may argue—but he once did it better and more effortlessly.

In spite of my misgivings about his durability and resourcefulness, Rollins remains one of the few immediately recognizable tenor voices on the scene, and the album has a couple of things going for it—the choice of material, consisting of three standards and four of the leader's original compositions, is curious but likable, while Rollins has assembled a splendid supporting cast that includes a seasoned rhythm section, a clever improv accomplice in guitarist Bobby Broom and a reliable frontline partner, long-time trombonist Clifton Anderson, who also produced the album.

Besides the title selection, inspired by a phrase his late wife, Lucille, would use to keep his feet on the ground, Rollins wrote "Nishi" for a bassist friend in Japan, "Park Palace Parade" for a now-defunct Harlem dance hall, and "Remembering Tommy" for another close friend, the late pianist Tommy Flanagan. Among the standards, "Stairway to the Stars" is well-known, Ricardo Drigo's "Serenade" considerably less so, while "Someday I'll Find You" is best recalled by my generation (there are a few of us left) as the theme of a popular '30s radio program, Mr. Keene, Tracer of Lost Persons, and was previously recorded by Rollins on his Freedom Suite (Fantasy/OJC, 1958).

Although I heard nothing here that caused my spine to tingle or my hair to stand on end, Sonny, Please may just earn Rollins another Grammy Award, thus proving how far removed I am from the ability to render sound judgment. In my opinion, Rollins is one of the foremost tenor saxophonists of the last half-century; on the other hand, I am appraising his latest album, not his body of work, which is as prodigious as it is impressive, and in that narrower context must concede that I was less than blown away.