By FARRELL LOWE
February 22, 2009
Sign in to view read count 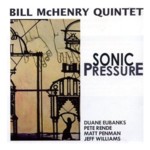 In the world of music, some live performances stand out with distinction. There are nights where the bandstand can be a magical place, with the musicians expressing an added dimension to their normal artistry. Those nights are special and are, with luck, captured in a recording like this one. Sonic Pressure was recorded live at the Fat Cat Jazz Club in New York City in June of 2005, and captures tenor saxophonist Bill McHenry's quintet in fine form.

The album begins with "Night Owl," an introspective, sensitive piece penned by McHenry, that immediately reveals the cohesion and empathy this ensemble is capable of producing. The mood is sculpted delicately by every soloist and the rhythm team holds the tenuous space created by the melody with alternating shades of tension and release that add greatly to the feel of the tune.

The energy picks up considerably after the opening piece and the group explores a myriad of moods, colors, and ideas on another original entitled "The Hit." McHenry often has a big, sensuous sound on the tenor that is reminiscent of Lester Young or Fred Hess. Like these players, he exploits his mastery of the horn's tonal palette to great effect, without calling attention to said mastery by useless displays of virtuosity.

Overall, there is an interesting juxtaposition between McHenry's warm tenor tone and the harder, tart sound of trumpeter Duane Eubanks. Together, they provide a broad mix of hues for the ensemble to work with. They both have strong voices, individually embodying a confident relationship to each member of the band and to the material they are traversing. They bring something new to each piece. For example, "Night Owl" has a smokey and quiet feel, followed by a bop swinger that is more muscular and swaggering in nature.

The covers of "Pollack Springs" by Bob Moses and Ornette Coleman's "WRU" are vibrant and dynamic and take the group into more abstract territory. On "WRU" pianist Pete Rende offers a striking solo. Most importantly, the cover tunes feel like they belong to the group and are not added simply to fill the set. As the album progresses, new facets of interaction between the members of the band are revealed, and each piece is explored with verve and nuance.

This is a well-recorded document (perhaps the best seat in the house) that captures a wonderful and inspired night of music. The only thing better would have been the experience of seeing them in person.