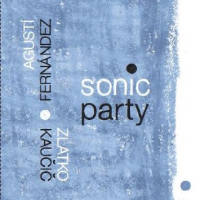 Sonic Party documents a live meeting between Catalan pianist Agusti Fernandez and Slovenian percussionist Zlatko Kaućić. Unlike similar encounters with his countryman Ramon Lopez, all the selections here are generated on the fly. Such pairings accentuate the percussive nature of the piano, and all the more so because Fernandez is one of the greatest proponents of this in his determined delving into the keyboard's innards. In spite of residence abroad and appearances throughout Europe since 1975, Kaučič 's discography remains relatively slight, though it does include collaborations with heavyweight saxophonists such as Evan Parker, Peter Brötzmann and Steve Lacy.

Credited with ground drums, Kaučič majors on unconventional textures and seems more a percussionist rather than drummer. His tendency toward the higher pitches through untethered cymbals and gongs counterbalance the pianist's rich voicings. He is less concerned with momentum than prospecting coloration and timbre. As a collaborator, Kaučič proves receptive and most importantly transparent, allowing sufficient space for Fernandez' parts to stand out, as on "Sirob" where he joins partway through, but only to embellish a very quiet minimalist passage. If anything perhaps there is a tad too much empathy and not enough assertion from the Slovenian.

As ever Fernandez exploits the potential of the entire instrument. While he taps into a deep vein of lyricism, like that revealed on his El laberint de la memoria (Mbari, 2011) in the opening "Us And Other's," later in the same cut he also evokes Cecil Taylor with his dashing evenly articulated lines and call and response between the registers. His piano preparations blend well with the metallic percussion on both the title track and "Lonci" where he scrapes and rubs on the strings creating broad slabs of sound until ultimately it becomes impossible to tell who is doing what. On "Monde," after a delicate extemporized melody, Fernandez once again switches his attention to the piano interior where his manipulations resonate with Kaučič 's chimes and exotic sonorities. It's a favorite gambit winningly explored throughout this set.