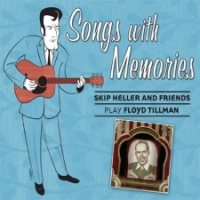 It would be oh so tempting to say the music impresario Skip Heller has found his niche with Songs With Memories: Skip Heller and Friends Play Floyd Tillman but with his next recording, more likely than not, he would prove that statement ludicrous. Heller's 2012 Fakebook II: That's Entertainment (Weatherbird) was a sequel to his 2004 recording of "standards" Fakebook (Hyena Records), the two bookending a number of recordings documenting Heller's curious musical evolution to where we are now.

Fakebook II: That's Entertainment was very much a precursor to the present recording and equally different from the first Fakebook. Heller has been drifting toward older forms for the past several years, focusing on lesser acclaimed artists, those who innovated in the shadows of more "popular" artists. Floyd Tillman is considered one of the founders of Western Swing. A superior songwriter, Tillman peened the great "This Cold War With You," "I Love You So Much It Hurts," and "Slippin' Around." Tillman's bona fides are solid for a relatively small corpus of music, all produced before 1960.

What Heller brings to the Tillman table is a sincere belief in the music and the chops to pay proper homage to it. Heller's singing is deliberate and his guitar playing superb. He is joined by a cast of guest vocalist sharing his dedication to this music. Que up "I've Got the Craziest Feeling" and "Westphalia Waltz" and this music will become crystal clear. What Heller has done here is highlighted music that he gives a damn about so that we will properly give an equal damn about it also. This is a totally fulfilled labor of love.

Rhythm In The Air; This Cold War With You; I Gotta Have My Baby Back; Let’s Make Memories Tonight; I love You So Much It Hurts; I’ve Got The Craziest Feeling; Daisy Mae; Floyd’s Song; Slippin’ Around; Westphalia Waltz.