By EYAL HAREUVENI
November 7, 2013
Sign in to view read count 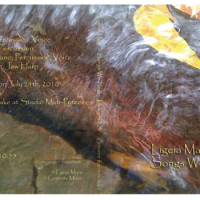 The sophomore release of the Colorado-based aggregate of musicians Ligeia Mare, is based on similar recordings that were the basis for the quintet's debut 1 (2012). Songs We Never Thought Of distills its live, spontaneous improvisations into loosely structured sonic events. True to the inspiration for its name, the lake in the north polar region of the Saturnian moon, Titan, these dreamy and evocative soundscapes bridge spacey, psychedelic progressive rock with abstract texts and voices, weird percussive sounds and assorted techniques of improvisation. This, the debut album for this band is a homemade, self produced release.

The core players are still guitarist Farrell Lowe, bassist Dave Willey,pianist Elaine di Falco augmented by trumpet player Ron Miles and drummer Ernie Crews. The pieces evolve unhurriedly, built sparsely layer upon layer, changing course abruptly and always maintaining an enigmatic sonic envelope. These soundscapes demand attentive listening in order to decipher the dynamics of the performances. Miles is the only musician who opts for clear, straight lines, usually melodic and lyrical ones, while the others prefer more anarchistic interplay. Still, given the experimental and eccentric spirit of these soundscapes, the music is accessible, often cinematic and suggestive of mysterious narratives.

The usage of the vintage RMI electra piano with assorted percussion instruments played in repeated, hypnotic pulse, as the dominant atmospheric sound sources of "Cover Me In Water," "Where Is The Moon" and "Mother Tongue," reference early psychedelic rock music, close in spirit to the early, experimental albums of {[Pink Floyd}} or the German Popul Vu. These nuanced soundscapes are spiced with the gentle vocals of di Falco and playful folk improvisations of Miles and Willey on the accordion. "The Old Road Near Home" is the only piece that sounds like a conventional song. It begins with a passionate and highly melodic duel between Miles and Willey on the accordion with subtle addition of otherworldly sounds, but these sounds, now with gibberish, ecstatic vocals, take over and spin this piece into an anarchistic improvisation that drown the melodic theme with weird and noisy sounds.

Dust And Tides; Cover Me In Water; The Beekeeper; Where Is The Moon; The Old Road Near Home; Mother Tongue.