Rob Reddy's Honor System: Songs That You Can Trust 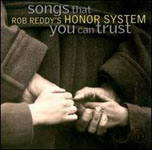 Your speakers are liable to wilt and degenerate into molten rubble while playing the opening track titled, "Thread"! Here, the powerhouse rhythm section of drummer Pheeroan Aklaff and bassist Dom Richards drive spikes into the earth as guitarist Jef Lee Johnson enhances tension and excitement with blistering electric guitar lines. Well, Rob Reddy's Honor System follow up their excellent Songlines recording with Songs That You Can Trust, now on the Koch record label. "Thread" is all about guts and determination because this Honor System reads the riot act—with a no-nonsense, slightly in-your-face game plan. They speak the truth and summon your attention with unbridled fortitude.

On "Deep Sway" we are treated to premonitory, fervent choruses from the horn section atop a free-style rhythmic structure with all the peaks and valleys and then some. Here, Johnson, Richards and Aklaff implement a cavernous bottom, as saxophonist Reddy, trumpeter Eddie Allen and trombonist Josh Roseman alternate, coalesce and come at you with slash and burn soloing. "Good People" features endearing soul/blues grooves from the mighty electric guitar of Jef Lee Johnson contrasting a slow-drag, New Orleans style horn arrangement all performed with a distinctly modern albeit hard-nosed edge! The Honor System raise a little hell on "Trust," which boasts somewhat of a mock funk chart along with free-jazz underpinnings nicely counterbalanced by Johnson's country and western style acoustic guitar picking. Ideas abound as the Honor System segue into "Count Your Blessings" which revolves around Dom Richards' well-stated lead bass lines. Reddy and company execute a stomping" straight-four beat as the momentum develops into a pugnacious free-jazz romp, toggling between solid and structured themes enhanced by the appropriately pounding drumming by the great Aklaff. Mad and Innocent" is a country blues with all the bad intentions featuring spirited solos by Reddy, Roseman and Allen along with brash choruses that convey an air of celebration or triumph.

After listening to this recording it is easy to visualize the sweat dripping from the musician's faces as if we had just witnessed a live performance. These gents put every ounce of effort they can muster into their performances and it shows. The message here conveys tons of impact, zestful compositions, clever arrangements and heated soloing as Rhe Honor System means what it says. Reddy along with an assemblage of top-flight proven jazz warriors bring it on home featuring thrills and excitement along the way. Songs That You Can Trust is just that!