Carin Lundin: Songs That We All Recognize

By MARK SABBATINI
April 7, 2006
Sign in to view read count 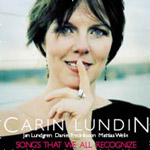 The title promises musical comfort food, and that's what this album delivers. No more, no less. Songs That We All Recognize is a well-assembled album of mostly standards that takes no chances, offers no unexpected curves and avoids any disappointments for listeners seeking low-key acoustic straight-ahead jazz. Swedish vocalist Carin Lundin's third album is in the same league with discs such as Diana Krall's The Girl In The Other Room, although Lundin doesn't have quite the same velvet quality to her vocals or arrangements.

Lundin occupies the lower end of the midrange without much variance, sounding more professional than passionate, which is not necessarily a drawback for listeners who are into an even-handed approach. But her treatments can sound rather sterile compared to the original versions and other interpreted arrangements.

The opening "Ain't That Love" is a smooth and bouncy jazz ballad, a soothing reworking of Ray Charles' laid-back R&B original. "Pick Yourself Up" is nicely and playfully mellow, but unfortunately recent comparison pits it against the far superior Latin arrangement by Dianne Reeves on the Good Night And Good Luck soundtrack. "Little Girl Blue" gets the wistful slow ballad treatment, without the taunting spirit heard by others.

The arrangements on these and the rest of the songs are textbook—Lundin sings the main lyrics, there's a conservative minute-long solo (usually by pianist Jan Lundgren) and then Lundin closes out the tune. Again, there's nothing wrong if this is what listeners are seeking—and there's more of that kind than the others who're looking for novel deconstruction—but it has very little sense of spontaneity.

Perhaps it shouldn't be surprising the most attention-getting songs turn out to be Lundin originals. "Take Your Time Blues" is plodding in pace, but strong in intensity as she and Lundgren both add a dash of audio color to their pitch, giving the sense a real conversation is occurring. "Available" is a dark ballad where Lundgren and bassist Mattias Welin knock a few dents in the passive listening experience with some low-end rumbles.

Songs That We All Recognize is solid enough, fulfilling its apparent intent, but the recording falls in a vast middle ground. Those familiar with similar albums will be hard-pressed to find enough uniqueness or artistry to make it worthy of adding to a collection. It's worth noting there are absolutely no Swedish qualities to this album, a disappointment for those used to Scandinavian jazz on the intellectual cutting edge, but perhaps a benefit to her fellow countrymen if they haven't had ample chance to hear standards stripped of modernistic accents.

Ain't That Love; Little Girl Blue; Pick Yourself Up; Secret Love; Take Your Time Blues; Love Me Or Leave Me; I'll Be Around; Them There Eyes; Available; You Look Like Someone; The Party's Over.