By DAN BILAWSKY
December 8, 2016
Sign in to view read count 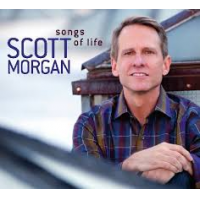 There's no greater teacher than life. Its bounties and tragedies, triumphs and defeats, and strange flirtations with absurdist theater and dead on truth have a way of enriching perspective and giving us the tools to communicate at a much deeper level. Few embody that fact better than vocalist Scott Morgan, who, after studying music in college in the '80s, taking a protracted time away from the art form, and reengaging with the craft at the dawn of the new millennium, is finally releasing his debut album.

Morgan's background in musical theater greatly informs his work on Songs Of Life, allowing him to exist in a variety of character spaces and scenes. His strength sits with his ability to tap into the proper emotional streams and put across an idea without coming off as disingenuous. It might sound like something that's easy to do, but it's not. The medley of Dave Catney's "Little Prayer" and Lerner and Loewe's "Wouldn't It Be Loverly"—the former given as a threnody to its composer and other victims of the AIDS epidemic, the latter performed with a touching, featherweight delivery—is a prime example of the candor that comes through in Morgan's voice. "Lost In The Stars" is another one.

In terms of repertoire, Morgan proves to have catholic tastes. He takes a crack at vocalese by writing his own lyrics to a Chet Baker solo for "It's You Or No One," visits two James Taylor tunes, touches on Duke Ellington, investigates a number of Fred Hersch compositions, delivers a wonderfully nuanced take on Alan and Marilyn Bergman's "Like A Lover," and rides off into the sunset with the The Beatles' "I Will." Some of the material, such as Hersch's "Lazin' Around" and Ellington's "I'm Just A Lucky So And So," speaks in lighthearted tones; other tracks swing with style, guided by an ace crew that includes Hersch, bassist Matt Aronoff, and drummer Ross Pederson; and a good number of selections allow for deep reflection and rumination.

Some may shy away from dubbing Morgan a "jazz singer," but the classification of what he does, or what he is, is largely irrelevant. The veracity of his vocal work is what counts. He takes each song on its own terms, pulling personal meaning from the music and words while remaining respectful in his interpretations. That's all that anybody could want or ask for in a singer.

It's You Or No One; Little Prayer/Wouldn't It Be Loverly; Song Of Life; Lazin' Around; I Just Found Out About Love; Secret O' Life; Like A Lover; I'm Just A Lucky So And So; Lost In The Stars; I'll Follow; This Heart Of Mine; Don't Let Me Be Lonely Tonight; I Will.