By DAN BILAWSKY
December 31, 2013
Sign in to view read count 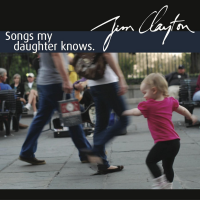 Pianist Jim Clayton must have one hip daughter; or perhaps it's the other way around. Regardless, both parties clearly inspire one another through music. On the simply-and-directly titled Songs My Daughter Knows, Clayton explores the musical ins-and-outs of the first three years spent with his cherished child—Eileen Agnes "Lenny" Clayton.

The album opens on the fairly obscure, Sesame Street-connected "Grouch Anthem." After hearing this performance, it's hard to understand why the song isn't a favorite among the toddler set. This fun number rolls over a NOLA groove that lives somewhere between "Iko Iko" and a Bo Diddley beat. "Tea For Two" comes next, shifting from a waltz to 4/4 swing, and the irresistible "Inside Straight" follows. This version of the Adderley brothers-penned piece, slick and funky as it is, proves to be one of the highlights on the album.

As the program continues, Clayton visits the world of prime time television ("The West Wing—Main Title"), swings on a Count Basie classic ("Flight Of The Foo Birds") and puts a cakewalk groove beneath a beloved standard ("Autumn Leaves"). The relaxed and flowing "Sing" and Kermit-owned "Rainbow Connection" close out the program.

Clayton is based in Toronto but he traveled to NOLA to record this album; it was a smart move. He put together a superb Crescent City-based crew for the occasion and these musicians don't disappoint. While drummer Jason Marsalis still isn't looked at in the same light as his famous brothers, his star continues to rise, and with good reason. He displays rhythmic savoir-faire, steering many of these songs in the right direction (i.e. "Grouch Anthem," "Sing" and "Inside Straight"). Bassist Peter Harris has a strong hookup with Marsalis, percussionist Bill Summers upholds his reputation as the consummate colorist and trumpeter Marlon Jordan adds a dash of variety to the mix during his two guest spots.

This album may have been inspired by a youngster but the end result never resembles child's play. Clayton and company do an outstanding job with these musical makeovers which offer plenty for people of all ages to enjoy.

Grouch Anthem; Tea For Two; Inside Straight; The West Wing-Main Title; Flight Of The Foo Birds; I Have A Little Plant; Autumn Leaves; Little Leo; Sing; The Rainbow Conncection.