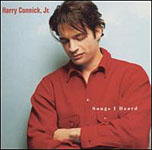 Generations have their own songs. Over the years, Walt Disney's artistic contributions have had a lot to do with that. More to the point, Broadway, television and the film industry have left us with countless memories that will never fade. Many of them are timeless and most of them cross generations. Songs from Annie, Willy Wonka And The Chocolate Factory, The Sound Of Music, The Wizard Of Oz and Mary Poppins are etched in there permanently.

Harry Connick, Jr. has chosen a big band format for half the selections presented here. Recall that it was Connick who composed the soundtrack for When Harry Met Sally. His vocal style and swinging big band sound brought several memorable albums to a wider audience ten years ago. Connick's career has blossomed, and he's become a celebrity. However, his roots remain in New Orleans and his love of the music cannot be ignored.

Singing "Oompa Loompa" with lone piano accompaniment, Connick is at the top of his form. His natural vocal style brings the throwaway tune around front and center. Connick respects these songs. He sings "Ding-Dong! The Witch is Dead" with admirable support from Branford Marsalis. Over half the selections on Songs I Heard include Connick's big band, and many of these sidemen were with him ten years ago. Orchestras are included on four of the album's selections. A Dixieland combo steps out for "A Spoonful of Sugar," while a special New Orleans street band joins Connick on "Supercalifragillisticexpialidocious." Making his debut this year as a Broadway composer, lyricist and arranger, Connick recently completed the score and lyrics for Thou Shalt Not, an adaptation of Emile Zola's novel Th'r'se Raquin. As long as folks like Harry Connick, Jr. continue to create sensible music for a broad audience, future generations will also be able to point out the songs they heard ' with fond memories.

Track Listing: Supercalifragillisticexpialidocious; The Lonely Goatherd; Ding-Dong! The Witch is Dead; Maybe; Pure Imagination/Candy Man; Golden Ticket/I Want it Now; Oompa Loompa; A Spoonful of Sugar; Stay Awake; Something Was Missing; You're Never Fully Dressed Without a Smile; Over the Rainbow; The Jitterbug; Merry Old Land of Oz; Edelweiss; Do-Re-Mi.