By JEFF DAYTON-JOHNSON
June 3, 2009
Sign in to view read count 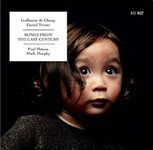 Pianist Guillaume de Chassy and bassist Daniel Yvinec tend to be rigorously conceptual in their approach to making records. Previous albums revolved around the jazz treatment of classic French chansons on Chansons sous les bombes (Bee Jazz, 2004), a documentary-like set of jazz chestnuts with vocals contributed by New Yorkers encountered on the street on Wonderful World (Bee Jazz, 2005), and standards played without their melodic lines and given titles from Gary Larson cartoons on Ghost of a Song (Juste une Trace, 2003).

Restricting themselves this time round to songs from the twentieth century is a relatively loose concept. De Chassy and Yvinec take a broad view of the last century, mixing standards including George Gershwin's "Taking a Chance on Love" with selections from the more recent Paul McCartney, Neil Young and Prince songbooks. Their inclusion of the more recent material is less self-consciously hip than other jazz artists who cover rock and roll tunes.

De Chassy and Yvinec holed themselves up with 150 songs and rehearsed exhaustively. That preparation is evident in the empathy between the two on the record. Having winnowed down the set list, the pianist and bassist went to New York to record with Paul Motian and Mark Murphy—who last worked together 47 years ago, with none other than Bill Evans. The whirlwind nature of the sessions lends the performances an attractive loose-limbed feel. Murphy, for example, begins "Then I'll Be Tired Of You" still out of breath from having ascended six flights of stairs to the studio. He sounds great, and de Chassy and Yvinec's meticulously constructed cohesion spreads to everyone in the Franco- American quartet.

In a piano trio setting with Bill Evans alumnus Paul Motian, the group must have thought twice about taking on "I Loves You Porgy," famous among the repertoire of the legendary Evans-Motian-Scott LaFaro trio. Nevertheless, de Chassy neither apes Evans nor goes to great pains to differentiate himself: in the shadow of giants, he is at ease and acquits himself beautifully. In the final minutes of the Gershwin tune, de Chassy quotes a measure from Prince's "Condition of the Heart" (the record closes with a full version of that tune). The effortless and lovely juxtaposition is what this record is all about: the continuity of craftsmanship of the great songwriters of the century now past.

Something So Right; I'll Walk Alone (vocal version); I'll Walk Alone (instr. version); Then I'll Be Tired Of You; Like A Hurricane; Alone Together; Junk; You Fascinate Me So; I Loves You Porgy; Taking A Chance On Love; Answer Me My Love; LEtang; I Wish You Love; Condition Of The Heart.