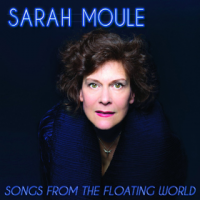 Class will out, as they say. It's certainly true on this album—class bursts out of Songs From The Floating World. From Sarah Moule's sophisticated, cool, vocals and the stylish playing of the cream of British jazzers, through to Simon Wallace's music and arrangements and Fran Landesman's inimitable lyrics, everyone involved with this fine album is a class act.

Moule is a leading interpreter of Landesman's songs: her understated approach heightens the impact of the lyrics and ensures that every nuance and subtlety is communicated. Wallace (who is married to Moule) is Landesman's most prolific collaborator, working with her until her death in 2011 at the age of 83. His arrangements add depth and richness to the melodies through the use of bass clarinet and shakuhachi as well as the more usual piano, guitar, bass and drums.

It's not all Landesman: songs by other writers include an atmospheric reading of Crolla and Prevert's "Cri De Coeur" and a torch song take on Cole Porter's "I've Got You Under My Skin." There's also "Lots Of People Do"—music by Wallace, lyrics by writer and journalist Julie Birchill who was once Landesman's daughter-in-law. However, Landesman's lyrics are at the heart of Songs From The Floating World—funny, romantic, satirical, cutting or dramatic, they're never dull or clichéd. Ten of the songs on this album are co-written by Landesman and Wallace: the best of them, such as Landesman's own favorite "Scars," are deservedly achieving the status of standards.

There's a blues feel running through much of Songs From The Floating World—not just on the obvious tracks, such as Willie Dixon's "My Babe," but also on "Lord I Wanna Be Good," "Lots Of People Do" and "Don't Fall In Love With Me." Much of the credit goes to Nigel Price, whose guitar playing is always a joy—Wallace's Hammond playing also captures the feel.

Six of the Landesman/Wallace songs are receiving their debut recordings. "If You Believe That" swings slinkily and still manages to make a few salient points in a humorous way. "Lord I Want To Be Good" offers a short, pithy, philosophy that might well be close to Landesman's own—Moule sings three times, with heartfelt sincerity, "Lord I wanna be good," before adding the caveat "not right away."

"Did I Break Your Heart?," a piano and voice ballad, is beautiful—and as heartbreaking as the title suggests. It may well be one of the finest of all the Landesman/Wallace songs, another standard in the making, Moule's superbly-judged vocal giving the tale of a long-ended relationship added poignancy.

"Everybody's got scars" sings Moule on Landesman's favorite song, ..."it's the way we keep score." Album reviews, on the other hand, got stars. Songs From The Floating World gets five.

Lord I Wanna Be Good; Men Who Love Mermaids; Lots Of People Do; Scars; Cri Du Coeur; I've Got You Under My Skin; My Babe; Hell's Angel; Don't Fall In Love With Me; Love's Eyes; Looking For A Boy; Stranger; I Need A Little Sugar In My Bowl; Noir; If You Believe That; Did I Break Your Heart?