Kyle Eastwood: Songs From The Chateau 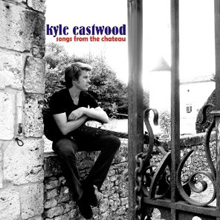 Kyle Eastwood's career encompasses the writing of film soundtracks, as well as the life of a jazz composer, bandleader and bassist. On those seemingly rare occasions when he isn't working, Eastwood spends much of his time in France. Songs From The Chateau is his fifth album since 1998's debut, From There To Here (Sony), and his fourth for British Candid label. It finds Eastwood recording in the country he loves, at the 15th century Chateau Couronneau in the Bordeaux region.

From drummer Martyn Kaine's first emphatic beats on "Marciac," this album simply bursts with energy and, to maintain the French theme, joie de vivre. It's full of strong compositions from Eastwood, and virtuoso playing from every musician, but never feels forced, or competitive: no showboating, no unnecessary technical complexity.

The range of styles is wide, demonstrating the influences from across the world that Eastwood has absorbed into his writing and playing. "Moon Over Couronneau" has a dreamlike, ethereal quality, and a standout acoustic piano solo from Andrew McCormack. "Café Calypso" is an irresistibly cheerful number, with some jaunty playing from Graeme Blevins and Graeme Flowers. "Soul Captain" is another celestial tune, thanks in particular to Blevins and Flowers' haunting horn lines. Once more, the melody is enticingly simple and insistent.

The lovely "Andalucia" is driven by Eastwood's simple, repeated, acoustic bass riff and Kaine's fluid, more complex, percussion. Flowers' trumpet flies over the top, evoking the vastness and beauty of the Andalucian countryside, while Eastwood's solo adds a touch of North African spirit. "Down At Ronnie's" is inspired by London's Ronnie Scott's Club. It's a loose, funky, jam-band, kind of number, that wouldn't sound out of place in an Average White Band set. "Tonic" takes inspiration from more mainstream jazz sources with McCormack and Blevins' beautiful contributions channeling the spirit of Dave Brubeck and Paul Desmond.

While Songs From The Chateau is an album of varied moods, rhythms and beats it continuously evokes one particular emotion—joy. Eastwood and his band create music from the heart: uplifting, reflective and beautiful.