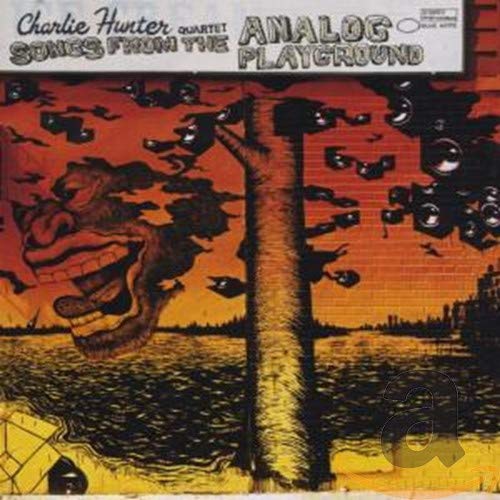 Ever since guitarist Charlie Hunter emerged onto the jazz scene he has had his own distinctive sound. His 1993 the Charlie Hunter Trio Recording (Mammoth) was a top jam-band disc and this was years before the jam-band phenomena was launched. His seven, now eight-string guitar playing added the bass line much like an organ accompanist, providing a soul-jazz to a hip-hop/rock mentality.

Songs From The Analog Playground is Hunter's seventh for Blue Note records and his first to feature vocalists. The percussion-heavy disc follows Duo (1999) recorded with Leon Parker and Charlie Hunter (2000) an expansion with horns. Hunter reveals in the release notes that as a street musician, you either included a vocalist or went hungry. Analog Playground is certainly an admission that in today's popular music instrumentalist are fine, but vocals sell records.

The four singers that drop in take very different paths to their craft. Rapper Mos Def sings a soulful "Creole" and raps straight through the opening and most infectious track of the album, "Street Sounds,' which incidentally has no guitar part. Theryl de Clouet of New Orleans Galactic covers the Willie Dixon blues "Spoonful" and Earth, Wind, & Fire's "Mighty Mighty," coming straight out of a Tower Of Power record. Kurt Elling speaks/sings his way through "Desert Way" and sweep-sings across an all percussion take on the standard "Close Your Eyes." Norah Jones covers Roxy Music's "More Than This" and Nick Drake's "Day Is Done."

There are five tracks of Hunter's quartet (saxophone plus two percussionists) laying out jam-band fare that begs to be heard live. It seems popular jazz is not serious music these days as much as it is serious fun.