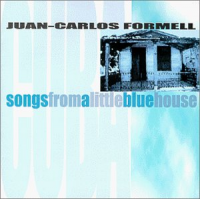 Wicklow records says Juan Carlos Formell's debut recording is solo (except for one or more guest appearances by guitarist Mark Whitfield). If so, he's either doing a lot of programming or he has more than two hands (and one voice). There's a rhythm section on most numbers, a vocal group on others, a muted trumpet on three, even a trombone on "La Vaquita," Of course, nowadays most of that can be sequenced (even the trombone and trumpet, I suppose), so it could be a "solo" album after all. I can't say with any degree of certainty. What I can do is describe the music I hear, which is, for lack of a better term, "laid—back Cuban." It's lovely and charming, rhythmically appealing, but definitely low—key and without much Jazz substance. Formell is a superb musician with an unimpeachable pedigree—he's the son of Juan Formell, founder of the Cuban super—band Los Van Van, and grandson of Francisco Formell, former conductor of the Havana Philharmonic. Aside from some annoying scrapes with the pick, his guitar playing, situated in the classical Cuban tradition, is beyond reproach, while his cool, unruffled vocals diffidently beckon one's solicitude. As there are no liner notes with my advance copy of the disc, I can't say where Whitfield appears, but I've a hunch he may be there on "Mango Mangüey"—and perhaps elsewhere. If you are partial to the music of Cuba, especially when it simmers instead of blazes, Songs from a Little Blue House should provide ample listening pleasure.