By EDWARD BLANCO
February 6, 2012
Sign in to view read count 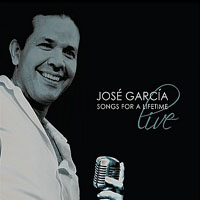 A truly impressive recording by a jazz singer from a most unlikely place Songs For a Lifetime, Live is the debut by Jose Garcia, from Tecate, Mexico. A self-taught guitarist who grew up exposed to a variety of music including jazz, Garcia was invariably drawn to singers of music from The Great American Songbook. Concentrating on guitar and specializing in Spanish and Flamenco music, he has become a much in-demand professional musician in the Los Angeles area.

Songs For a Lifetime, Live is, in effect , the culmination of an event from a past performance. A request to sing some jazz standards became a career-altering experience that revealed Garcia's husky and powerful vocal style, as his major appeal led to a newfound reputation as a modern-day crooner. Recorded Live at the New York Club on Del Webb Boulevard in Palm Desert, CA, the album captures Garcia singing songs from the American Songbook featuring pianist Carlos Rodgarman, bassist Mike Paganini and drummer Pablo Correa.

Sounding a bit like the great Mel Torme, Garcia begins to weave his magic with Cole Porter's "I Get a Kick Out of You," follows with a humbling treatment of "The Shadow of You Smile" and returns to another Porter classic with a delicious rendition the immortal "Night and Day." The one and only Tony Bennett would be proud of the way Garcia respects his "I Left My Heart in San Francisco," sung with real emotion and a lot of heart. Rodgarman—who is terrific throughout—delivers another fine piano solo on this one.

Garcia strums beautiful acoustic guitasr chords on two internationally-renowned Latin classics—"Besame Mucho" and Alvaro Carrillo's Mexican standard "Sabor a Mi." He goes it alone with a solo performance of Charles Trenet's "I Wish You Love," before getting back with the trio on a rousing rendition of "All of Me." The haunting "You Go To my Head" and lively "This Could Be the Start of Something Big" round out the set list as the singer concludes the evening in the same sizzling fashion with which he started.

There are not too many male singers in jazz today that can claim the mantle of "crooner," but Garcia is clearly one of them. A gifted singer with remarkable skills on the guitar, Garcia clearly possesses the firm foundation to establish a name for himself, and his auspicious debut, Songs For a Lifetime, Live, is convincing proof.

I Get a Kick Out of You; The Shadow of Your Smile; Night and Day; I Left My Heart in San Francisco; Besame Mucho; I Wish You Love; All of Me; You Go To My Head; Sabor a Mi; This Could Be The Start of Something Big.