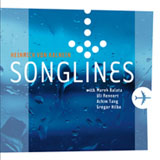 Heinrich von Kalnein's quintet includes Marek Balata as a wordless vocalist who employs scat, vocalese, and assorted vocal sound effects that impart an atmospheric character to the pieces. The effect is similar to that of using wordless vocals in a movie soundtrack to evoke a choral or spiritual ambience (e.g., Lord of the Rings death scenes).

Scat and vocalese, definite jazz conventions, are pushed to a level equal with von Kalnein's reeds. This is best illustrated on "Sam where Balata and von Kalnein become one in the music. Kalnein's introduces a compelling melody that is joined by Balata, who solos in scat to striking effect. "Sam is one of the more compositionally tethered pieces on the disc, which is more widely populated with air, open spaces filled with bass, percussion, and keyboards on all sides with von Kalnein and Balata weaving in and out of the mix. These effects are well reflected in "Songlines and the eerie "Homepage.

The closing "Coming Home is an ethereal ballad, softly set to flight by von Kalnein and spurned on by keyboardist Uli Rennert, who uses a variety of effects to cushion the saxophonist's emotive flights. Achim Tang establishes a steady bass heartbeat, welcoming Balata into the harmonic, melodic mix. Songlines smacks of originality and uniqueness in a current deluge of less well conceived projects.