By JOHN SHARPE
November 8, 2014
Sign in to view read count 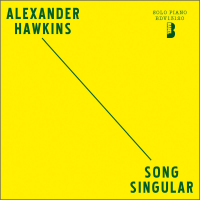 Pianist Alexander Hawkins shines brightly in the firmament of the UK jazz scene. Already his resume is impressive. As well as leading his own ensemble, he features as part of outstanding collectives like the transatlantic Convergence Quartet with cornetist Taylor Ho Bynum and drummer Harris Eisenstadt, and Decoy with fellow countrymen bassist John Edwards and drummer Steve Noble. In addition he's shared the bandstand with the likes of saxophonists Evan Parker, Joe McPhee and Marshall Allen. Richly gifted Hawkins is both an intriguing composer and a spellbinding improviser. It is that last quality which he explores most fully on Song Singular his first solo album.

Although largely abstract, Hawkins' compositional sensibility ensures structure and melody in each number. Indeed all the pieces remain solidly in the modern jazz vernacular. But while there is nothing overly dissonant, at the same time, rarely does any meter carry through a whole cut. Hawkins acknowledges Duke Ellington and Monk as key influences in the liners, but he draws on the whole of the jazz tradition, transmuting such base metals into a highly personalized approach. In fact it is the iconoclastic Cecil Taylor, himself a devotee of Duke and Monk, who comes through most strongly on the gamboling opening "The Way We Dance It Here," with its ringing insistent motifs and equal articulation of each note. That same inspiration surfaces on "Joists, Distilled" where repeated kernels are restlessly interrogated until they spread like ripples from a stone thrown into a pond.

Although Monkish phrases peek out from the lush undergrowth towards the end of the romantic "Early Then, M.A." and amid the flowing jam-packed lines of "Two Dormant, One Active," it's not until the deconstructed "Take the A Train" that Hawkins pays overt homage to Duke with a short, ideas laden rendition refracted through the prism of contemporary styles. On "Advice" Hawkins parlays the Oxford blues, replete with churchy melancholy and garrulous outbursts. The disc closes with "Unknown Baobabs (Seen in the Distance)" in which shimmering tremolos mask a tune first heard on No Now Is So... (FMR, 2009). Although covering a wide sweep of terrain, there's nothing derivative about this set which serves as a resonant calling card for yet another aspect of Hawkins craft.

The Way We Dance It Here; Early Then, M.A.; Joists, Distilled; Stillness from 37,000 ft.; Two Dormant, One Active; Hope Step the Lava Flow; Take the A Train; Distances Between Points; Advice; Unknown Baobabs (Seen in the Distance).